Somewhere Back In Time Tour 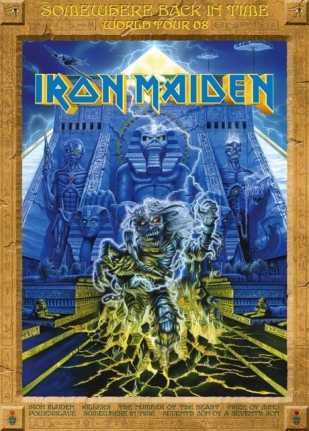 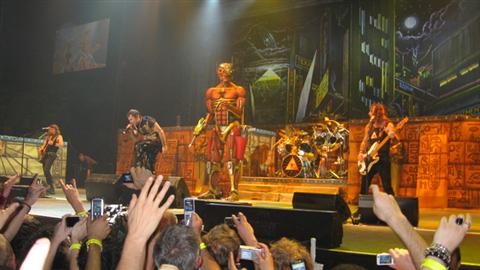 On September 5, 2007, the band announced their Somewhere Back in Time World Tour, which ties in with the DVD release of their Live After Death album. The setlist for the tour will consists of hits from the 80s, with a specific focus on the Powerslave era for set design. The tour started in Mumbai, India on February 1, 2008 where the band played to an audience of about 30,000. The first leg of the tour consisted of 24 concerts in 21 cities, travelling over 50,000 miles in the band's own chartered plane "Ed Force One" - they played their first ever concerts in Costa Rica and Colombia and their first Australian show since 1992. On May 12th, the band released a new compilation album, titled Somewhere Back In Time - The Best Of: 1980-1989. It contains a selection of tracks from their 1980 eponymous debut to 1988's Seventh Son of a Seventh Son, including several live versions from Live After Death.

During the Somewhere Back In Time tour, Bruce Dickinson has said that there are plans for Iron Maiden to write and record a new album, most likely to come out next yearВ Dickinson has also been informing audiences that future tours will feature more recent Iron Maiden material. The Somewhere Back In Time World Tour ended on 19 August 2008 In Moscow Russia.

Intro: Doctor, Doctor
Churchill's Speech
Aces High
2 Minutes To Midnight
Revelations
The Trooper
Wasted Years
Run To The Hills
The Number Of The Beast
The Rime Of The Ancient Marriner
Powerslave
Can I Play with Madness
Fear Of The Dark
The Iron Maiden

Encores:
Moonchild
The Clairvoyant
Hallowed Be Thy Name

Intro: Doctor Doctor / Transylvania / Churchill's Speech
Aces High
Minutes to Midnight
Wrathchild
Children of the Damned
Phantom of the Opera
The Trooper
Wasted Years
Rime of the Ancient Mariner
Powerslave
Run to the Hills
Fear of the Dark
Hallowed Be Thy Name
Iron Maiden

Encores:
The Number of the Beast
The Evil That Men Do
Sanctuary