You are certainly the most popular Rock singer of the past few years. But you're not strictly-speaking a "star", or anyway your attitude doesn't show it..

It all depends on various factors: your country of origin, your surroundings, your social status before you became "famous", your personality, and your conception about life. In the first instance, coming from Britain and living there has an influence on my lifestyle. When you settle in the United States, you "only" have to have money to find yourself surrounded by people who think that you are wonderful, fantastic – all the doors are open for you. In England, every day life incites you to remain yourself – you go to your local supermarket like everyone else, and you still have to queue, celebrity or not! It's also a personal choice. On tour, you get everything served on a silver platter, even on stage. But when you don't play, you're on your own, so either you pay someone to serve you, or you manage by yourself. In order to keep sane, you need this contact with every day reality, with the life most people live. We're not different people. Your mental balance cannot only rest on the name of a band, even if it's Iron Maiden! My choice was to take some distance from the band and to dissociate artistic life from private life. And I also keep both feet on the ground when I think about how I started, with Samson. I was penniless and, because I had nothing, I was free.

A limited freedom, don't you think? Without any money, you quickly realise that you can't do much.

I meant "free" in the sense of "independant". Nobody was interested in me, I wasn't surrounded by opportunists, there was no other pressure but to live – or mostly survive. Every day was unique. Money changes a lot of things, it entices and spontaneously creates a shallow and meaningless entourage. I avoid it.

Does the record/tour routine make you consider Iron Maiden like a job like any other, only better paid?

Let's take an example: when you do an interview (maybe not this one, 'cause it isn't not quite "conventional"), you talk about your record, about your projects. Now, this is work. A show, even if we enjoy it and if it constitutes a very positive aspect of our lives, is about selling a part of yourself, like any other product. If you look good on stage, the public shows its appreciation by going out and buying the album. Being the singer in a band is my main activity, my livelihood, it's much more than "just a job". I would hate to lose the pleasure I derive from it, to get bored of it... 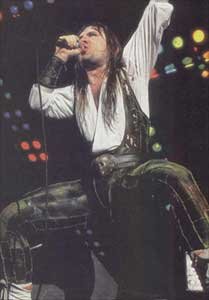 Do you ever feel low?

Yes, and the audience supports me morally. To tell you a story, during our last UK tour, in Sheffield to be precise, I got a terrible cold and I had to stay in bed for three days. The day before I fell ill, I already had huge problems to sing. The gig was to last two hours, but after three songs, I had to tell the audience that I couldn't do any more. And they were all very understanding. This kind of support gives you a warm feeling.

How would you define the most important aspect of the gigs?

The feeling, the atmosphere between the audience and the band.

Let's talk about something more private, namely your hobbies, and especially fencing, the sport you love most.

I just passed the exam I had been preparing for a while. It's only a start in the apprenticeship of the field: teaching fencing. Next Summer, after the tour, I'll take more exams for a week or two in order to perfect this. You get better every time. In January '86, for instance, I changed my stance. Knowing that my father is ambidextrous (left-handed in reality) and that I have some slight coordination problems with my movements, I switched to my right arm. I really progressed since! Much more evolution than in the previous seven years of practice and my left hand in competition. Who would have thought that I was ambidextrous too?

Is it more interesting to teach or to take part in competitions?

Hard to say, mostly considering that I cannot do it as often as I'd like. At times, I can practice two days a week, at most. But I'm on the road the rest of the time. I keep fit through my performances on stage. That's real sport! In the changing rooms, I always have my equipment with me. So when we tour, I always try to find a fencing club on the way, more precisely in France and Germany. Before the Somewhere On Tour 86-87, I trained in Offenbach (FRG) five days a week in a very tough club, including a 5 km run every morning. Sport physically develops me, and the tour keeps me fit.

On top of this dynamic sportsman image you show the public, are stage clothes also important to you?

I think that this is the first tour where the look of each musician is put forward, as we usually worked only on the music and the stage set. This time, our stage clothes are as professional as the music itself! (laughs)
I probably initiated this change, but it never was essential to us.

Was it easy to convince the others to wear those clothes?

Yes. I suggested a few ideas of rather flashy outfits, but not ridiculous. Then, I mostly developed my personal style while integrating special effects into the clothes themselves, like this luminous heart or the pyro in my gloves. The suit itself weights some 8 pounds, including batteries! And I have other crazy ideas for the next tours and the festivals.

The stage set has always been essential ever since the appearance of the main Maiden concept, i.e., Eddie.

We want to surprise the kids. I consider that you need to invest both on a human and financial level to please the audience, on top of you misical abilities. But you need imagination, and many bands lack this type of thing.

No everyone can afford stage sets like yours. The sums invested are enormous for each tour.

I do understand that, but what can you do? The kids want to see something spectacular.

How do you decide on the conception of the stage set?

I submit my projects to our technical partners, explaining that it's a view of my imagination and that this is the kind of stage set we, as musicians, would feel comfortable with. We discuss it, we get an overall view of the stage, then we use a creation company.

How did you ask them to design your clothes?

I just gave them the following idea: imagine a bloke landing on an unexplored planet, who finds alien lizards, and kills them to make clothes. I told that design company, "That's the kind of gear I want".

On stage, as you must have seen, it looks like lizard skin. It's only Spandex, but it's very reptile-like.

Tell us about your life outside the tours. Describe your "home, sweet home".

I've got a large house with a massive garden. I have two dogs. In the house, I love this little room, a kind of library where I have some 6 or 700 books. I write some songs there, finding the inspiration in front of my window. I love reading, my sources of inspiration are quite diverse, and I use old books, like the one I recently acquired – published in 1890, it deals with fantasy and imaginary subjects. I like magical treatises, occult stuff. I'm less interested these days, though, as I found out that a large number of those books are pure bullshit.

Science-fiction, too. There are many prestigious references on the cover of the album (Bradbury, Asimov). And there's this famous futuristic vehicle on the inner sleeve.

Yes, that's equipment that was actually used for the Blade Runner movie with Harrison Ford. These machines are in Hollywood. And these are no studio pictures. We had to endure a temperature of 50?C for this photo session.

For a short time, we actually left the musical aspect. Let's get back into it with the happy perspectives and projects of Iron Maiden for 1987-88.

We'll start our next tour with Summer festivals. It'll be a change, as we've lost the habit. 1988 should see us play Donington. I'll get involved in an even crazier concept for the next tour.