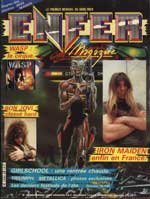 Iron Maiden don't need to be introduced to the readers of Enfer Magazine. Ever since their first album, Iron Maiden, was released some six years ago, they have acquired a world-wide fame, and this without any help from the media (radio, TV,...), without having to wear silly make-up (you know who I mean...), or even without making the headlines for "trouble of the public peace". Their success is only due to their hard work and talent, through extensive tours, playing in the most unexpected places, and giving their fans whatever they expected when they paid ?10 (or more) for a gig or a record.

Iron Maiden have won their fans one after the other along the years, and always did their utmost to please them. They have put out albums, making sure that every new release was even better than the previous one, and that the subsequent tour was also more and more sophisticated.

Iron Maiden isn't the kind of band that lives on past glory and to make the most of their reputation. They go forward, always trying to do their best for us. At the time of the release of their new album, we met the musicians in Frankfurt, Germany, as they were rehearsing and giving the final touch to their new show, the one that the French audience will be able to see at the end of November.
In the following interview, Steve Harris, in good shape and excited at the idea to get back on stage, tells us about the new album, about the new tour, of course, but also about many other things like, for instance, the sad state of the English football team after the last Football World Cup...

Before we start talking about the new album, can you tell us what happened since the end of the last tour?

After the end of the World Slavery Tour and the release of Live After Death, we enjoyed a full 5 months of complete rest. (Note: it was the first real "holiday" in 6 years!) Bruce was practising his favourite sport, fencing, Nicko was perfecting his flying, Adrian went fishing in the cold streams of the Canadian Rockies, Dave, who had just married a lovely Hawaiian girl, was enjoying his new house next to a gorgeous beach, and I played football...

Well, all this isn't exactly "Metal"?

In a way, you're probably right... but to be honest, I don't think this way. We all needed some rest and it was very important that we could let off steam, independently of each other. We'd been leading a very "Metal" kind of life, as you say, for the past 6 years, and this was a necessary break. Necessary for ourselves and our health, therefore our lives, which was at stake, and also for the band because such a "Metal" lifestyle could have threatened its cohesion and unity...

Do you think that there was at any point a risk to see Iron Maiden split?

Absolutely not. But, you know, life on the road causes inevitably some tensions, and now we're almost all married and have children, so we have to consider the needs of our wives and kids, so we have to come home from time to time. I'd be extremely pissed off to have a successful "public life" while my private life suffers from it. I can't even imagine that.

When did you get together to start working on the new album?

At the beginning of January '86. After 5 month, inactivity was becoming a burden and we were really happy to get together again. Every time we meet to record a new album, we're all really excited. But, this time, I can tell you that we'd never been so happy to be together again. The atmosphere within the band was perfect and it was obvious that everything was going to be just fine. These 5 months of complete rest enabled us to start afresh. Besides, in the last 4 or 5 years, we'd put aside quite a lot of material on which we could now work in peace. So, when we met up in January in Jersey to start rehearsing, we all had plenty of ideas going through our minds. This break was really beneficial for the band. We didn't want to become some sort of robots, stuck in the vicious circle "record, tour, record, etc".

Quite simply for tax reasons. Let me explain: in the UK, the government decided to get some pocket money by imposing scandalously the artists. Thatcher and her mates steal from us over 80% of what we earn... So, we decided to "go into exile", and we have to spend 9 months a year out of the country. It's a bit difficult, but it was out of the question to give all our money to those bastards... Paradoxically, Jersey isn't considered to be part of the United Kingdom, and it's a wonderful island with loads of pubs...

Back to the album...

There have been exactly 6 months between the start of the rehearsals and the final mixing of the album. To summarise: January and February, rehearsals in Jersey, then the recording of the rhythm lines (bass and drums) was done in March and April at the Compass Point Studios of Nassau, in the Bahamas. Then, we recorded the guitars in May and June, with the use of guitar- and bass-synths for the first time, and the vocals were added at the Wisseloord Studios of Amsterdam. At the end of June and beginning of July, Martin Birch, our producer, mixed the lot at the Electric Ladyland Studio in New York. And at the beginning of the Summer, Somewhere ln Time was born.

All that was left was the cover...

All our fans know how important our cover sleeves are. We once again asked our resident designer, Derek Riggs. He spent 3 months designing and painting this illustration that depicts a very futuristic Eddie, Blade Runner-style, in the middle of a place where you can find plenty of details related to the band's history, may they be clubs we played (from the Marquee to the Long Beach Arena) or references to some of our older songs. It's a real feast for the eyes, I think.

Let's talk about the content of this album, namely the music itself.

Somewhere ln Time, once again, will be "your money's worth", as they say, with 50 minutes of music. It was virtually impossible to put one more minute on the vinyl. There are 8 tracks, 5 from me, 3 from Adrian Smith, and 1 I wrote with Dave Murray.

Sorry, I only wrote 4 songs by myself. I always get it wrong because of this song I wrote with Dave. Last time we wrote something together was for 'Still Life'. A few years back, we'd also written 'Twilight Zone' and 'Charlotte The Harlot'. But anyway, I honestly think that Somewhere In Time is our most sophisticated album to date...

...Saying that, do you think that the previous albums weren't so elaborate?

Not at all. What I mean is that, this time, we've had more time to work on the songs, mostly if you consider that, during the 5-month break, everybody was practising a lot his respective instrument or his voice. Besides, it is obvious that, in 1986, we're better than we were back in 1980. But, to me, the main difference resides in the fact that we used the best studios that exist today. We didn't record in various places for nothing. Nassau, Amsterdam, New York... And I think that the sound is close to perfection because we used a new process for the first time, the Direct Metal Mastering, invented in Germany and only applied to classical music recordings so far. The result is quite remarkable, mostly if you're lucky enough to own a laser compact-disc reader.

Now, let's go through the different tracks of the album.

As I said, I wrote 4 songs: 'Caugh Somewhere In Time', 'Heaven Can Wait', 'The Loneliness Of The Long Distance Runner', and 'Alexander The Great'. As usual, it was impossible for me to write cheesy love songs like, "I love you, you love me, what a wonderful life". Anyway, I've never been interested in this kind of things. 'The Loneliness...' was inspired by an old British film with the same title. The theme is ead simple: in life, you have to run, move forward, even if it means that you have to run alone. Just move on without a care about what people might say about you. 'Heaven Can Wait', the single, that's the story of someone who's struggling not to go to Heaven quite yet. Eddie himself dictated it to me one night during the last tour. 'Caugh Somewhere In Time' relates a nightmare trip through time due to the misfunction – or misuse! – of a time machine. My most ambitious composition is certainly 'Alexander The Great', a story based on true facts. When we started working on the LP, I was immersed in the story of Alexander The Great, a man who had a fantastic and incredible life. I fell in love with him and, quite naturally, I wrote the song and the lyrics, all this within two weeks. I must say that I'm very proud of this track.

How about the 3 songs written by Adrian Smith?

...and that's 'Wasted Years', 'Sea of Madness', and 'Stranger In A Strange Land'. The first two are songs with, as usual, a pretty optimistic message. In life, you have to try and have an optimistic attitude in front of all the problems that you have to face – and God knows that's it's not always easy! 'Stranger In A Strange Land', although inspired by the title of a Robert Heinlein book, has a strange origin. Adrian remembered a story that was published in the press a few years ago, about this old sailor who was found dead, perfectly preserved in the ice of the North Pole. In fact, he was a member of an expedition that had disappeared after an iceberg had struck their ship. When they found his body, they awarded him a posthumous medal...

Last, but not least, the song you wrote with Dave...

...'Deja Vu'. In the band, we used to say that Dave was "giving birth" to a song every three years. The last time he did was on the Piece Of Mind album. Well, we can say that Dave has for excuse to be a newly-wed... What I'd like to say about Dave's song writing is that he always comes up with great riffs and very flashy solos. But he often has problems to write lyrics that match the melody. This is where I help him out.

You are currently rehearsing for the upcoming tour. What can you tell us about it?

Somewhere On Tour 86/87 will start on 10th September in Yugoslavia, and will carry on to Austria and Poland (for the second time). Then we'll tour the UK in October and November before going back to the Old Europe, from North to South (Scandinavia, Germany, Holland, Belgium, France, Switzerland, Italy, Spain and Portugal). We'll take a few day off around Christmas before our 70 gigs in the USA and Canada. May 87 will see the end of this "marathon", with gigs in Japan, Australia, and New-Zealand. We'll be on tour for over 7 months. Dave Lights has been working for months on the stage set and the lights to make the show more extravagant than ever, using a futuristic theme. Just you wait and see.

Last question: what did you think of the English team during the football World Cup?

Luckily for us, we won't have to wait until then to discover the new Iron Maiden show. And, judgeing from the great form displayed by Steve Harris and his colleagues at the end of August in Frankfurt, just before the start of the tour, we can be certain that it'll be worth it..