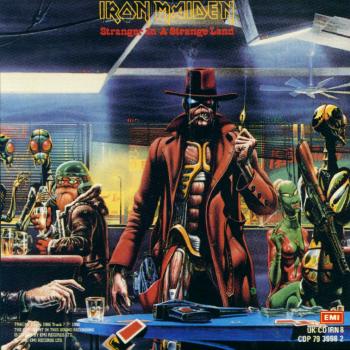 Although it is actually unrelated to the 'Stranger In A Strange Land' song, the sleeve picture is reminiscent of Robert Heinlein's science-fiction classic of the same name, as well as the spaceport in Star Wars. This is one of the best Eddie pictures, a tough cigar-smoking Clint Eastwood cyborg Eddie striding through a futuristic bar full of weird alien beings. A small paragraph on the back of the sleeve reads as follows:

The android with no name walked into the crowded spaceport bar. Eight-foot tall, with death in his cold android eyes, he strode across the room. Small green aliens scuttled out of his path. Fearsome Martian warriors would not meet his gaze and the air froze when he croaked in his dark gravelly voice, "A pint of bitter please, mate."

Stranger In A Strange Land (Smith)
This is the same version as the one that appears on the Somewhere In Time album.

That Girl (Barnett, Goldsworth, Jupp)
This is a fairly traditional-style love song, co-written by Andy Barnett, who was one of Adrian Smith's bandmates in Urchin and who also collaborated with Adrian on ASAP (Adrian Smith And Project). It was recorded entirely by Adrian and Nicko (with Bruce on vocals) because, as Nicko says, apparently Steve and Dave didn't want to learn the song. It's a good little song that makes a great B-side and it even has a pretty decent laid-back guitar solo.

This was co-written by another ASAP cohort Andy Barnett and originally done with 'The Entire Population of Hackney'. Nicko and Adrian recorded the drums and guitar first, the rest of the band adding their parts later.

Juanita (Barnacle, O'Neil)
This is another song from The Entire Population Of Hackney, a little band put together by Nicko and Adrian during their off-time before the band started work on Somewhere In Time. The original authors of the song are Steve Barnacle and Derek O'Neil. 'Juanita' is quite strange lyrically, about a man yearning to get back together with Juanita but who apparently ends up rejecting her. Bruce even changes some lyrics at one point, singing "I'm never going down on Juanita" instead of the original "I'm never going back, Juanita". This indicates further that this song, with a few other B-sides from that time, was not really taken seriously by the band. The song itself was recorded entirely by Adrian and Nicko (with Bruce on vocals).

Originally done by a band on the British scene in the early 80s, Marshall Fury. Andy Barnett brought the song in for the 'Hackneys' project for H and Nicko and it was appropriated to be one of our Bs.