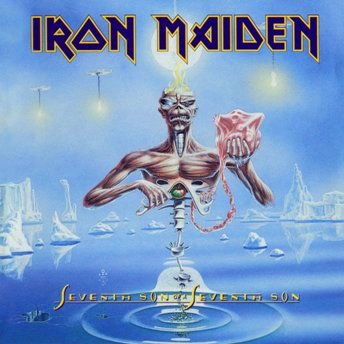 I am he the bornless one
The fallen angel watching you
Babylon, the scarlet whore
I'll infiltrate your gratitude
Don't you dare to save your son
Kill him now and save the young ones
Be the mother of a birth strangled babe
Be the devils own, Lucifer's my name

The twins they are exhausted, seven is the night
Gemini is rising as the red lips kiss to bite
Seven angels seven demons battle for his soul
When Gabriel lies sleeping, this child was born to die

One more dies one more lives
One baby cries One mother grieves
For all the sins you will commit
You'll beg forgiveness and none I'll give
A web of fear shall be your coat
To clothe you in the night
A lucky escape for now young man
But I see you damned in endless night.

Suffocation waking in a sweat
Scared to fall asleep again
In case the dream begins again
Someone chasing I cannot move
Standing rigid nightmare's statue
What a dream when will it end
And will it transcend?

Restless sleep the minds in turmoil
One nightmare ends another fertile
Getting to me so scared to sleep
But scared to wake now, in too deep.

Even thought its reached new heights
I rather like the restless nights
It makes me wonder it makes me think
There's more to this I'm on the brink
It's not the fear of what's beyond
It's just that I might not respond
I have an interest almost craving
But would I like to get too far in?

It can't all be coincidence
Too many things are evident
You tell me you're an unbeliever
Spirtualists? Well me I'm neither
But wouldn't you like to know
The truth
Oh what's out there to have the proof
And find out just which side
You're on
Where would you end in Heaven or
In Hell?

Help me. Help me to find my true
Self without seeing the future
Save me, save me from tortuning
Myself even within my dreams

There's got to be just more to it
That this
Or tell me why do we exist
I'd like to think that when I die
I'd get a chance another time
And to return and live again
Reincarnate, play the game
Again and again and again.

3. Can I Play With Madness?

Can I play with madness?

Said you're too blind to see

I screamed aloud to the old man
I said don't lie, don't say you don't know
I say you'll pay for this mischief
In this world or the next
Oh and then he fixed me with a freezing glance
And the hellfires raged in his eyes
He said you wanna know the truth son?
Lord, I'll tell you the truth
Your soul's gonna burn in a lake of fire

Listen to me, said the prophet

Can I play with madness?

Love is a razor and I walked the line on that silver blade
Slept in the dust with his daughter, her eyes red with
The slaughter of innocence
But will pray for her.
I will call her name out loud.
I would bleed for her.
If only I could see her now.

Circle of fire my baptism of joy at an end it seems
The seventh lamb slain, the book of life opens before me.
But I will pray for you.
And some day I may return.
Don't you cry for me.
Beyond is where I learn.

Here they stand brothers them all
All the sons divided they'd fall
Here await the birth of the son
The seventh, the heavenly, the chosen one.

Here the birth from the unbroken line
Born the healer the seventh, his time
Unknowingly blessed and as his life unfolds
Slowly unveiling the power he holds

I had their lives in my hands
Their fates their fortunes in my visions
No one believed in my true prophecy
And now it's too late.

Feel the sweat break on my brow
Is it me or is it shadows that are
Dancing on the walls.
Is this dream or is it now
Is this a vision or normality I see
Before my eyes.

8. Only The Good Die Young

Mystery madman, a victim of cruel charade
Some innocent pawn in an end game, one more stalemate
Is death another birthday?
A way to kiss your dreams goodbye?
Do the undead live within us?
And look through our eyes?

Walking on water are miracles all you can trust
Measure your coffin does is measure up to your lust?
So I think I'll leave you
With your bishops and your guilt
So until the next time
Have a good sin