Can I Play With Madness 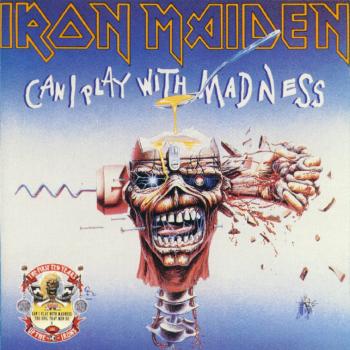 Can I Play With Madness was a very commercially successful single that debuted at number four and rose to number three in the U.K. charts. Perhaps this is partly because the song was a bit more "accessible" than most of Iron Maiden's material, but whether or not that is a good thing is an open question. Certainly it resulted in greater public and media exposure for Iron Maiden, propelling them to what was probably the peak of their popularity.

Can I Play With Madness (Smith, Dickinson, Harris)
This is the same version as the one that appears on the Seventh Son Of A Seventh Son album.

The song itself is fairly average for a B-side, but included at the end of the song is a whole sequence of short clips of Nicko that were taken during the recording of the Seventh Son Of A Seventh Son album. These clips are very funny and prove without anymore doubt that Nicko is stark raving mad!

Here is the real story of the infamous Black Bart, as told by Bruce Dickinson himself on his official website:

"Black Bart was a moment of madness. We were driving with our tour manager in Florida in about 1983, living the American Dream in an open-topped Ford Thunderbird. Suddenly we passed this petrol station with three suits of armour standing outside. I went: 'Stop! We have to get that suit of armour!' It was totally surreal a petrol station with a suit of armour for sale. Of course, I went in and found the thing was all welded together, was as cheap as shit and didn't move, but I wanted it even more cos it was so tacky!
"I left Black Bart in the back lounge of the bus where I used to sleep. The back lounge, of course, is where most of the nefarious shagging went on in the middle of the '80s, so that's how 'Black Bart Blues' (Maiden B-side) came about. He saw the lot. The line was, I think: 'Suspenders and suspension/Medieval (k)nights in Tennessee'."

This was a song written about Bruce's suit of armour called Black Bart, which was kept in the back lounge of the tour bus! Great songs are made of this!!

The song itself is once again about the famous charge of the Light Brigade during the Crimean War, like 'The Trooper' on the Piece Of Mind album. Although this particular song hasn't got the galloping power of 'The Trooper', it nevertheless remains a brilliant piece.е.