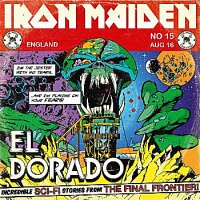 СStarting with an intro pounded by a heavy bass reminiscent of "The Longest Day", this is a politically-motivated song in the same vein as "Holy Smoke", although it seems to deal more with the politicians than with the preachers, making it more in the line of "Be Quick Or Be Dead". In any case, it deals with the mythical city of El Dorado, and essentially with the metaphor it represents of something glorious that is promised whereas it doesn't even exist – like what most politicians and all religious leaders talk about. The story is told from the cynical point of view of the deceiver who makes a living of exploiting human stupidity and gullibility – and there's a lot to be made!

There is an interesting reference to Marillion in the sentence "I'm the Jester with no tears". The progressive outfit's 1983 album Script For A Jester's Tear is one of the landmark for this style of music, which Iron Maiden have adopted albeit in a much heavier form. The reason for this reference may simply be a tribute from one great band to another.

Another noteworthy detail in the lyrics is the use of the term "banker", "with a letter out of place". Those in the UK will have understood that this means "wanker", but the rest of the world may not have caught the subtlety of Bruce's mischievous humour. This is one of the tricks Bruce uses here or there in his writing, a bit like using "Fokker" instead of "fucker" in the lyrics of "Tailgunner" – a tongue-in-cheek piece of typical British humour.

It was released as a free downloadable file on the official website on 8th June 2010, the day before the band embarked on the Final Frontier World Tour. It was also the only song off the new album to be played during the first leg of the tour.