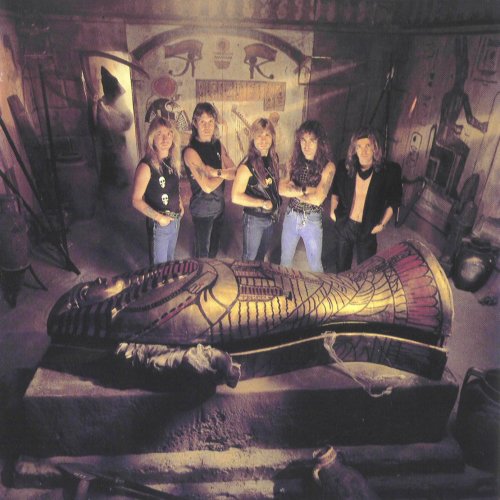 Powerslave represents the essence of Iron Maiden at the pinnacle of their "golden age", and is the first album without any lineup changes in the band. No other album so clearly captures the spirit of power, fantasy, and emotion. The album cover is in my opinion the best of all the Maiden albums, and perfectly sets the mood of power and mystery. The songs are for the most part superb, with four of them becoming timeless Maiden classics.
Full-length, EMI Records
September 3rd, 1984

This album was also released as a Picture Disc.

for Bruce: Bruce's mum and dad, who still don't know where he is; Ross "I don't wanna spend my birthday in Poland" Halfin; Bill Bailey; Charlie Barnett; Steve, Trevor and all the reprobates at the Channel Islands Aero Club; Steve "Can ya handle the Power" Yorke; Lorraine and Jim Colkett... and everybody else we've forgotten. Buy us a pint and you too can be on here next year! Beware of false imitations!

This album is dedicated to the memory of Marcus Cowe a good mate and a great guy.

To the fans THANKS as always. See you on the

FOR NORTH AND SOUTH AMERICA:

FOR REST OF WORLD: