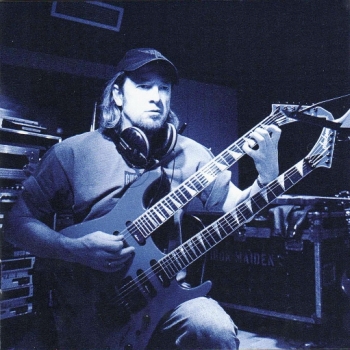 Whilst at school, Adrian befriended Dave Murray and founded his first own band Urchin as lead singer and lead guitarist. Adrian bought his first guitar from Murray , a Woolworths' Top 20, for five quid, his dad fixed it. Murray left to join Iron Maiden, the new band of another friend, Steve Harris. Smith continued to front "Urchin" until joining Maiden in late 1980 for the Killers album (released in 1981), replacing Dennis Stratton. Smith first wrote songs for Maiden on the 1982 album The Number of the Beast, and was the band's secondary song writer from then on. Smith and Dave Murray combined playing dual lead guitars helping to forge the trademark sound of Iron Maiden. Some notable dual lead solos are "2 Minutes To Midnight ", "Alexander the Great" and "Rime Of The Ancient Mariner". Notable solitary solos include "Wasted Years", "Stranger In A Strange Land" and "The Wicker Man".

Adrian 's solos are usually composed rather than improvised. His legato playing is very smooth and fast, and typically even his very fast passages have a musical function and relationship to the chord structure behind the solo, drawing from modes and arpeggios which are more often from the blues licks.

Smith released a solo LP with the band ASAP (Adrian Smith And Project) titled Silver and Gold in 1989. Following its release, Smith departed from Iron Maiden in 1990, and was replaced by Janick Gers. It is widely believed that Adrian left due to his unhappiness with the direction the band was taking: after releasing the experimental Somewhere in Time and Seventh Son of a Seventh Son albums, Steve Harris had decided to take the band back to a more traditional hard rock direction which you can clearly hear on the No Prayer for the Dying album. This album featured one last song co-penned by Adrian with Bruce Dickinson, "Hooks in You".

When he left the band in 1990, I think everybody was a bit surprised at how much we missed him and certainly, I don't think anybody had realised how much the fans would miss him - big time. I wouldn't have rejoined Iron Maiden if he wasn't in the band. I just don't think it would have been complete without Adrian , and now, it's great having three guitarists.

Later, Adrian formed his alternative influenced band Psycho Motel. The band recorded two albums, State of Mind (1996) and Welcome to the World (1997). Smith would also play on Bruce Dickinson's Accident of Birth and The Chemical Wedding albums. This more progressive direction's influence on Iron Maiden's own performances since he rejoined the band is clear.

On August 22nd 1992 Smith made a brief appearance onstage with Maiden to play "Running Free" during the Donington Festival, much to the appreciation of the audience.

In 1999, Smith re-joined Iron Maiden for the "Ed Hunter tour", a tour in support of the video game of the same name. Since then, Smith and Maiden have released 3 studio albums, Brave New World in 2000, Dance of Death in 2003 and A Matter of Life and Death in 2006. He remains with the band to this day.

In his spare time, Adrian loves fishing, as can be seen on the Rock In Rio DVD.

Smith's preferred guitar is the Fender Stratocaster, though he has used a variety of others over his career including several different Dean models, a custom built Jackson, Ibanez Destroyer, Stratocasters, Gibson Les Pauls, a Gibson Explorer and Gibson SGs. On the A Matter of Life and Death DVD he says the first guitar he bought was a Gibson Les Paul Goldtop that cost him ?235 when he was 17; he's still using it, and "it's still probably the best guitar I've got". He had to work on a building site all summer to pay for it. His current Stratocaster features a DiMarzio Super Distortion humbucker in the bridge position, which is the pickup he uses almost exclusively, and a Floyd Rose locking tremolo system. On the H/S/S strats he has been playing recently he uses the bridge humbucker almost exclusively.

A Fender American Stratocaster with a Floyd Rose tremolo system with a backup Fender.

A Gibson SG with a backup Gibson.

For the Fender American Stratocaster:

For the Gibson SG: