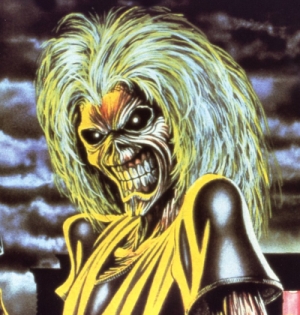 Steve and the band were trying out different things to incorporate in their stage shows a long time before the first Eddie appeared on an album cover. After Dennis Wilcock (a former vocalist) left the band a guy named Dave Beasly took over the whole stage act thing, and he soon got the nickname Dave Lights because of his almost insane ideas to improve the stage show with things like gunpowder, flower pots, lights and even vacuum cleaner parts. Once he it placed in the fund of the stage, beside the logotype of the band, a great mask that had acquired in an art academy and he used an aquarium air-pump to pump artificial blood through the mouth during the song Iron Maiden. The fans gave to the puppet the name of Eddie The Head, based on a well-known plenty joke at that time which goes something like this:

A woman had given birth to just a head, the doctor told her she
needn't worry since he would come up with a suitable body for
good 'ole Eddie within a year or five. So five years later Eddie's
father entered the room on Eddie's birthday and said:

"well today's your birthday, and boy do we have a surprise for you!"
after which Eddie replied: "Oh no!, not another bloody hat!" 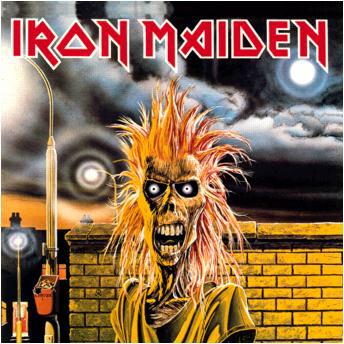 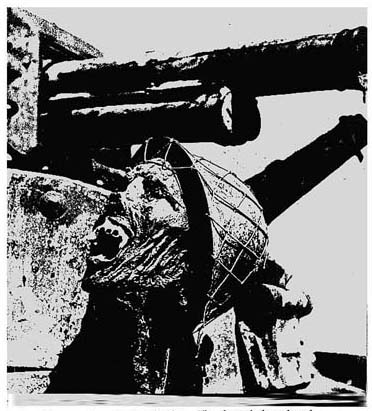 Eddie became the registered mark of the band but he was still only that head on the stage and nothing more, that is until the band hired Derek Riggs, through their manager Rod Smallwood, to designed the long awaited body for Eddie. The band decided to keep the "new" Eddie's appearance as a secret for everybody until the first album, therefore the Eddie which appears on the Running Free sleeve, is standing in the shadows.

.The first album indeed featured the face of Eddie, it was still a 'weird' Eddie and Derek soon changed his face. It wouldn't take long before Eddie appeared in the British newspapers and caused his first controversy, this was due to the "Sanctuary" sleeve (left photo) on which Eddie stabbed Margaret Thatcher, British first-minister, to death because she had torn an Iron Maiden poster off the wall. The later releases of the Sanctuary sleeve had to be censored, therefore a black bar was drawn over her eyes, this bar only appeared on the British releases. 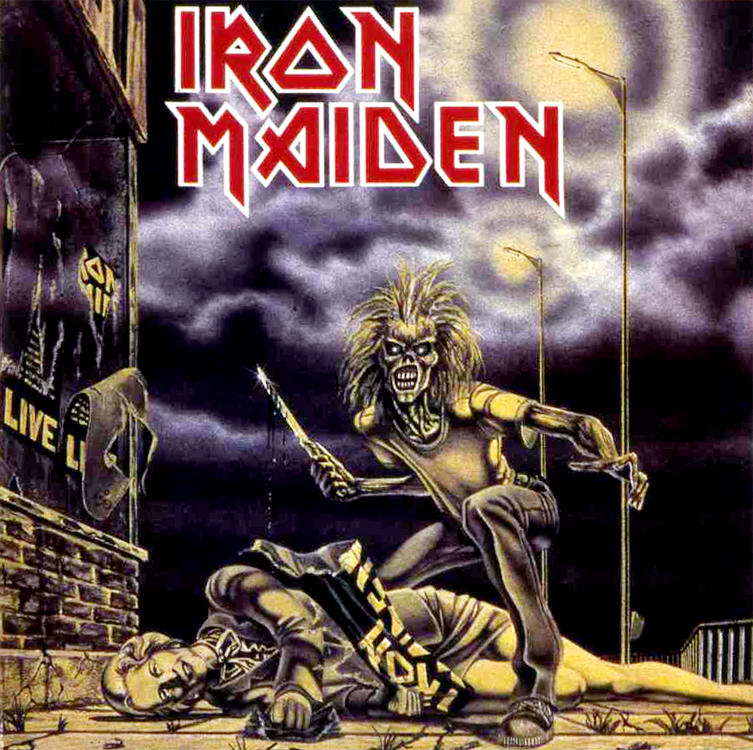 ....Maggie's revenge was swift though, judging from the "Women In Uniform" sleeve (right photo), on which she's waiting in an ambush to shoot Eddie with a machine gun. This sleeve caused a second minor controversy because a handful of outraged feminists accused Maiden of sexism since Eddie was walking arm in arm with a nurse and a schoolgirl, no one really took this protest very serious though.

The final major controversy Eddie caused was when he had bitten off Ozzy Osbourne's head as a joke after Ozzy bit off the head of a bat on stage once, the Ozzy Osbourne camp couldn't appreciate the joke very much so Maiden had to withdraw that drawing.

Other great curiosity in the history of Eddie is that only in double live album "Live After Death" the full name of the mascot was revealed. In a tombstone of its grave it was written, together with a text of H. P. Lovercraft, Edward T. Head. (Edward The Head)

The sleeves in good part of the albums and singles, have a sequence. Eddie loses an eye in the war (Aces High), an eye bionic is implanted (Somewhere In Time), he fights with the demon and it dominates him (Run To The Hill and The Number Of The Beast), it is locked into a sanatorium without his brain (Piece Of Mind), it is buried in a great pyramid (Powerslave) and he resurrects (Live After Death), besides other important sleeves.

Over the years to come Eddie changed a lot, the stage-Eddies became a few meters tall(!) and Eddie himself changed as well. Especially around the Somewhere In Time era Eddie started to change heavily, he looked more or less like a 'terminator'. These transformations were topped two years later during the Seventh Son Of A Seventh Son era, where only the upper part of Eddie's body remained.

For some reason the drawings began to deteriorate ever since that era, the No Prayer For The Dying sleeve featured a complete Eddie again (i.e. not just a head), but Eddie wasn't drawn as beautifully as Derek used to draw him. The only really good (Riggs) Eddie drawing since 1990 was the "Bring Your Daughter... To The Slaughter" drawing. It seems as if Maiden was getting disappointed with the Eddies the way Derek started to draw them, for the sleeve of "Fear Of The Dark" was drawn by a different artist (Melvyn Grant) and the ones which were drawn by Derek were rather ugly.

1Things didn't exactly improve when The X Factor was released, for the recent releases all feature a computer-drawn Eddie by Hugh Syme, in opinion of the majority of the Maiden fans this just isn't Eddie and everyone is missing of the great drawings which Derek used to make during the eighties...

The Best Of The Beast art was done by Derek Riggs but still lacks the quality of the glory day's illustrations such as Powerslave, Somewhere In Time or Seventh Son Of A Seventh Son... It is still to be determined if Derek Riggs will work on the new Maiden Album....

The sleeve illustrations and the new appearances of Eddie are always as awaited as the new music. Eddie reached the top in "Ed Hunter", in which is the star of a spectacular game of computer made by Synthetic Dimensions.

Take a few seconds and think of your favourite Iron Maiden album cover. It's a hard choice, isn't it? The pure malice of Killers, the intricate detail of Powerslave, the complexity and symbolism of Somewhere In Time... they just seem to reach out and grab your imagination. So what do these paintings have in common that make them excellent?What characteristics do all great album covers have?

These functions are extremely important, and judging from the profusion of horrible album covers, are commonly ignored. An album cover is the album's first and most important advertisement. It will be seen by virtually every person who likes music, no matter what their tastes in music are. The importance of this first impression cannot be overstated. Great album covers will lure people to try the album who might otherwise never hear the band's music. Probably your very first impression of Iron Maiden was an album cover mine certainly was. The exquisite detail of Powerslave and Somewhere In Time are well known, but there exist many other sub-themes which are repeated from album to album, such as the grim reaper and the cat with the halo, which appear on many album and single pictures. These tiny details give character and make the paintings a special treat. I get almost as much enjoyment from studying these pictures as I do from hearing the music.

Setting the album's mood is the other important function of the album cover. Often one can sense that an album will be excellent simply by absorbing the mood of the painting. An idealist might insist that the cover picture is irrelevant and that only the music really matters. But there really does seem to be some relationship between a cover picture and the way you hear the music. Try to imagine Powerslave with the Load album cover... there's no question that it would have blunted the power of the music. Experiencing an album is not only done with the ears, but also with the eyes and imagination. A perfect album cover such as Powerslave triggers the imagination and perfectly sets the mood of the album. If Powerslave had Load's cover, there would be no mood or imagination whatsoever, and the musical experience would be affected. In a very real sense, if you put puke on the cover then the music will tend to sound like puke.

Now I'm getting to the point of what this rant is about. Iron Maiden's album covers have been classics perfect in virtually every way. Their detail and complexity exactly matches Iron Maiden's intelligent and complex songwriting. This is due to the talent, creativity, and genius of one man, the 6th member of the band, Derek Riggs. I mean it literally Derek Riggs is a genius! Without his masterful paintings Iron Maiden's story might be very different. In the previous two decades many bands have tried similar strategies, but none have come close to Riggs's intricate detail and sweeping symbolism.

But as you all know, during the last few years an unfortunate trend has begun to take shape the master, Derek Riggs, has been shunted aside on the majority of new releases by the band. Now I have a great deal of respect for Melvyn Grant who created pictures for Fear Of The Dark and Virtual XI. They are good pictures, even though they may lack something intangible. But I've been very disturbed by the recent use of Ed Hunter pictures on Futureal and The Angel And The Gambler. I'm fighting to be objective here, but I really can't say anything except how I feel the Ed Hunter pictures suck. They look just like what they are, cheesy computer graphics. Sure they may be decent by today's graphic standards. But the pace of computer technology changes so rapidly that within a few short years they will appear ridiculously primitive. By comparison, master Riggs's paintings will never diminish and will always retain their compelling power and imagination. For a vivid illustration, compare the Ed Hunter cover of Futureal with Riggs's Futureal painting. True to form, Riggs's painting is a masterpiece, perfectly linking the ancient context of Powerslave with an exquisitely crafted futuristic technological mood. It's pure genius, the sort of painting that one can gaze at for hours. It's not only good enough for the Futureal single, it should have been the Virtual XI album cover! But what was chosen for the Futureal single instead? A ridiculous computer graphic from a game that will be obsolete before it even hits the shelves, completely devoid of character and imagination.

As for Ed Hunter itself, I'll reserve judgement until I actually play it. But even if it's the next Doom, it will be quickly challenged and replaced by newer and better games. Something so transitory should not be placed on a single or album cover where it will remain forever.

I'm not trying to tell Iron Maiden what to do, but I'd really be interested in hearing an explanation. The quality of the two pictures is as different as night and day! What were they thinking??? If I was Iron Maiden, I'd get the best imaginable contract for Derek Riggs and then double it. Keep him happy and creative, and take advantage of his unique genius to capture the imagination of a new generation of fans. These fans have grown up with computer games, and won't be impressed by graphical gimmicks. But no one can remain unmoved by a Riggs painting.

So, where should Maiden get their cover pictures? My vote goes for the master, Derek Riggs.