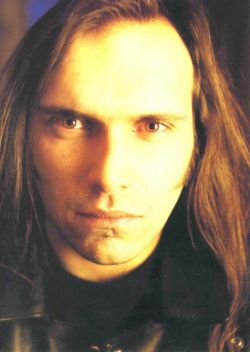 Blaze Bayley (born Bayley Alexander Cook, on 29 May 1963 in Birmingham, England) is the lead singer for the heavy metal band Blaze. He is, however, best known for his role as the lead singer of Iron Maiden from 1994 to 1999. Bayley was originally lead vocalist of Tamworth rock legends Wolfsbane. When Bruce Dickinson departed Iron Maiden in 1993, Bayley was chosen as his replacement. After a bad motorcycle accident, caused by losing control and clipping his knee on a catseye in the road, which put him out of action for a year, his first album with Maiden was The X Factor, released in 1995. Bayley went on to tour with the band in support of the album. In 1998 still with Iron Maiden he recorded the album Virtual XI.

The two Iron Maiden albums released during Blaze's time in the band charted significantly worse than the band were accustomed to receiving for studio albums. The X Factor achieved 8th in the UK charts, and Virtual XI hit only 16th putting it as the lowest Iron Maiden studio album, after Killers (which achieved 12th place in the UK charts). Lately, Blaze's albums with the band have been seen as perhaps 'not quite so bad as people thought' though reviews are still very critical when comparing Blaze to Paul Di'Anno and particularly Bruce Dickinson (perhaps unfair - Dickinson is one of the most popular frontmen in rock and is known for having a tone-variable voice making many singers unable to perform Iron Maiden songs). Some of this commercial failure (by the band's high standards) can be attributed to the tours being cut short due to Bayley's frequent sickness, and the more progressive, dark tone of the albums produced during his tenure.

In February 1999, when Iron Maiden announced that vocalist Bruce Dickinson was returning to the band, Blaze departed. He remains the longest tenured member of the group who is not a current member. The following year, Bayley released his first album with his new band B L A Z E. With this band he has so far revealed three studio albums and one live album, Silicon Messiah, Tenth Dimension, As Live As It Gets and Blood & Belief , respectively.

Despite his absence from the band, Iron Maiden still occasionally perform songs from Blaze's two Maiden albums, including the songs Man on the Edge and Futureal, both of which he co-wrote.

On the 14 February 2007, Blaze married Debbie, his long-term girlfriend, on the island of Gran Canaria.