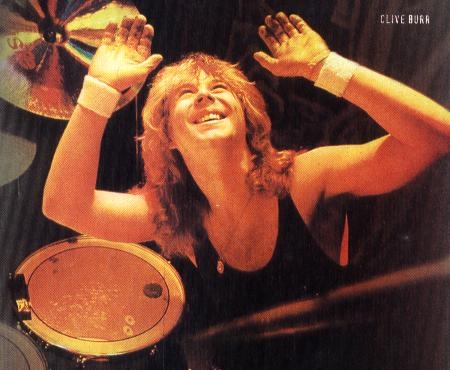 Clive Burr (8 March 1957 – 12 March 2013 ) was the fourth drummer in the British heavy metal band Iron Maiden. He'd previously played in the band Samson. He joined Iron Maiden in 1979 (an acquaintance of Dennis Stratton) and played on their first three records: Iron Maiden, Killers and The Number of the Beast. He left the band in 1982 due to the tour schedule and personal problems. He was replaced by the band's current drummer, Nicko McBrain. Clive co-wrote two of the songs on The Number of the Beast, Gangland and Total Eclipse. This is his only writing credits with the band.

After his departure from Iron Maiden, he briefly played in the French group Trust, switching places with former drummer Nicko McBrain (as he replaced him in Iron Maiden), and was featured in the short-lived NWOBHM supergroup Gogmagog. He also had a band known as "Clive Burr's Escape" (later known as Stratus), which disbanded after releasing one album. Clive then joined Dee Snider in his post Twisted Sister outfit Desperado, which was never fully realized due to a falling out with the band's record company. He performed with British bands Elixir and Praying Mantis in the 1990s, but did not become a member of either.

Burr has since been diagnosed with multiple sclerosis, the treatment of which left him deeply in debt. Iron Maiden staged a series of charity concerts after and were involved in the founding of the "Clive Burr MS Trust Fund" in order to assist him in his financial difficulties.

For several years, Iron Maiden tribute bands have staged a charity festival, Clive Aid, where they play and support him.

Clive's signature white drumkit can now be seen at the Hard Rock
Cafe in London , where it was donated in 2005.