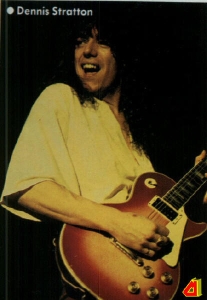 Dennis Stratton (b. October 9, 1952 in London, England) is a guitar player who is best known as a former member of the heavy metal band Iron Maiden from January 1980 to October 1980.

During this time, he participated in the recording of the group's first album, Iron Maiden, the Women in Uniform EP, some subsequent singles and the Live!! +one live album.

Since his departure from Iron Maiden, Stratton has played with bands such as Lionheart and, more recently, Praying Mantis. In 1995 Stratton had a project with former Iron Maiden singer Paul Di'Anno called "The Original Iron Men" in which both of them sang the songs. They only released two albums.

Since the recording of the band's first album, Stratton has been the only member of the band not to have contributed to the writing of songs. His replacement, Adrian Smith became a part of Iron Maiden's classic lineup from 1981 to 1990 and was deemed a huge contributer as a songwriter as much as he was a performer with the band. It has been heard direct from Stratton, that he left Praying Mantis in 2005, reasons are yet unknown.

Stratton can still be seen playing in pubs around the East London area, especially The Prince Albert on New Plaistow Road, Plaistow, Newham, London. He also plays regularly at The Victory in Saffron Walden, Essex, with another guitarist, under the name "Den and Dave". They normally play covers, on top of a drum machine and pre-recorded bass.

Stratton is also endorsed by Caparison Guitars, from his days with Praying Mantis and owns 2 custom ordered instruments from them. Live he appears to use a Marshall Valve-state combo amp with various Boss effects.