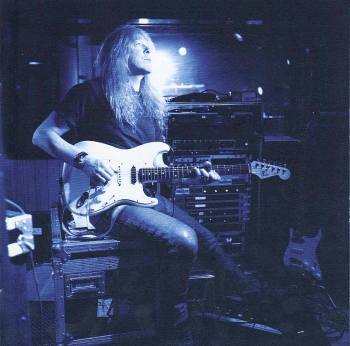 Janick Robert Gers is one of three current guitarists in Iron Maiden and a songwriter for the band. His father, Boleslaw, was an officer of the Polish Navy. Gers was the lead guitarist of the band White Spirit before joining Gillan, a group formed by former Deep Purple vocalist Ian Gillan. After Gillan disbanded, he played in the group Gogmagog (with former Iron Maiden singer/front man Paul Di'Anno and drummer Clive Burr an odd coincidence considering who he ended up playing with later) and with various artists including Fish of Marillion. In 1990, he played guitar on the first solo album of Iron Maiden vocalist Bruce Dickinson, Tattooed Millionaire. During the recording of the album he was asked to join Iron Maiden in place of departing Adrian Smith. He has remained with the band ever since, even after Smith rejoined the band in 1999

His solos are fast and furious, but Gers is a skilled composer. His main influence is Ritchie Blackmore of Deep Purple, from whom he has emulated certain onstage poses and soloing attacks, and Irish blues guitar legend Rory Gallagher. He is noted for having an enormous stage presence, as evidenced on the Rock in Rio DVD: he can often be seen bouncing up and down (along with Steve Harris), and occasionally does tricks with his guitar, such as spinning it around his body while playing, or throwing it up, catching it, and immediately starting to play again. Gers is a Hartlepool United football/soccer team fan.

I saw Janick onstage before I actually met him, and that was when he was with Gillan at Wembley Arena. I saw this flamboyant showman dancing around the stage playing great guitar, and I thought it was absolutely wonderful. Then he came down to a few of our shows and I met him backstage in the bar and we hit it off pretty much immediately - he was a really nice bloke.

In 1990, when Adrian left the band, Janick had just worked on Bruces solo album (Tattooed Millionaire) and obviously, he was going to be the first choice as a replacement. But I remember at the beginning that Janick was actually defending Adrian - he was upset that hed left the band and I think he was trying to talk him into coming back, which shows you what a good guy he is.

He came down to rehearsal and the stacks had been set up facing each other, wall-to-wall, so it was like a stand-off in a Western like The Good, The Bad And The Ugly, except I think we both wanted to be Clint Eastwood! We did The Trooper, we just went straight into it, there was no 'Lets work it out together quietly.' It was just like one, two, three, four bang! And straight away, sparks were flying round the room! It was apparent right away that this was going to work. He was very exciting to play with and it gave the band a well-deserved kick up the rear.

He is a genuine, salt-of-the-earth bloke, a very smart man with a great sense of humour. Hes a very sociable kind of chap. He likes going out strutting, especially on tour. Hell go out for 20 mile walks and try to hit every bar on the way back!

Hes a good soul. Hes got a very good way of calming things down if they suddenly start to go overboard. He can pull everything together and make sure that people see things the right way. Hes very good at expressing himself that way, a very diplomatic man.

When hes playing, hell push himself to the edge and really goes for it. There are two sides to it. His playing can be very controlled or it can be very spontaneous, but then he plays a lot of the melodic stuff. Hes got great feel, great dexterity, very fluid. So hes fully rounded as a guitar player who goes from one extreme to another. He encompasses all aspects, from the quiet acoustic clean stuff into overdrive. Its 360 degrees he plays everything. And hes a great showman.

He wrote the track Dance Of Death and its got everything on there, from the quiet moody melodic guitar to clean guitar to really heavy riffs, but done in the most complex and beautiful and sweet and heavy way, done with really good taste. If that song was the alphabet, from A to Z, its got every letter in it.