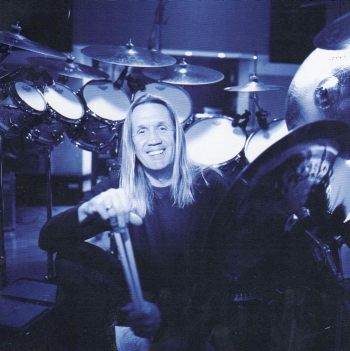 Michael Henry McBrain is the drummer for Iron Maiden. The nickname 'Nicko' is from Michaels childhood, where his favourite stuffed animal was named Nicholas the bear. Due to this, his parents called him Nicky. 'Nicko' was spawned when he was meeting a manager from CBS Records, with the keyboard player Billy Day. Billy introduced him as "My Italian drummer His names 'Neeko'". Michael liked the moniker, so he decided to use it as a stage name, after adapting the spelling slightly.

In the 1970s, Nicko played drums on some Pat Travers albums, and also played for Streetwalkers from 1975 to 1976; he also appeared in the band McKitty in the early 1980s. It was during a McKitty gig in Belgium that he first met Iron Maiden bassist and founder Steve Harris. He joined Iron Maiden in 1983 for the Piece of Mind album, replacing Clive Burr, after Nicko's previous band Trust had supported Iron Maiden on tour during 1982. As part of this tour, Nicko had to dress up as the devil and scare the audience before confronting Eddie. On one night of this tour, he stood in for Burr, and he has been with Iron Maiden ever since. In his role in Iron Maiden he has been cited as a major influence by many modern drummers in a wide range of styles, and often holds drum clinics for fans and drummers alike.

Nicko's first songwriting credit with the band is on the song New Frontier from the their 2003 album Dance of Death. Nicko also claimed he had written a song for 2006's A Matter of Life and Death but because he met with the band late in the writing process, there was no space on the album for it.

He has filmed several short videos for the band's official website and keeps a diary when the band is on tour, which can be read by Fan Club members. These diaries reveal his endearing, wacky sense of humour and his affection for his fans.

Style
His presence can be said to have added a large amount to the Iron Maiden sound and was felt immediately on the first album he recorded with the band, Piece of Mind. Nicko has been known to be able to play a variety of styles and with that time signatures, such as the 9/8 riff that features on Alexander the Great, the 7/4 riff on the song Brighter Than a Thousand Suns and the 15/8 riff that follows the second chorus on the song The Longest Day.

Unlike many heavy metal drummers, Nicko does not use two bass drums or a double pedal, since he considers it to be "too complicated", and "un-drummerish" [citation needed]. Instead, he has developed a very fast technique using just one bass drum. The only song Nicko McBrain has recorded using two bass drums was Face in the Sand from Dance of Death. He subsequently announced that it had been one of the hardest things he had ever had to play and that, for that reason, the number would not be included in the set list of the Dance of Death World Tour.

Equipment
Nicko currently uses Premier drums and Paiste cymbals. Previously, he had been a long-time endorser of Sonor drums but he switched brands to Premier in the late 1990s. For the A Matter of Life and Death album, he brought his "beast" snare drum "out of retirement". It was purchased in 1975, making it the oldest drum in his kit.

Religion
Nicko converted to Christianity in 1999 after an experience in the Spanish River Church, near his Boca Raton, Florida home. His wife, Rebecca, a Christian, had been praying for him, and on entering the Church Nicko found himself crying as he experienced a "calling". Recounting the tale, he said: "I just sat there thinking, 'I didn't drink last nightwhy can't I stand?'" "I had this love affair with Jesus going on in my heart."
Trivia
Nicko is a keen golfer.
He frequently plays the drums during Maiden downtime both in his drum clinics and his McBrain Damage band. He also formed a side project band called 7x70 with Dan Spitz from Anthrax and Vanilla Ice, but is unknown if they are still active. [4]
He currently manages New York metal band Voices of Extreme (or V.O.X).
Nicko has also appeared as a guest on the children's television show Sooty and Sweep. Discography