"Empire Of The Clouds" is the closing track from Iron Maiden's album The Book of Souls. An 18-minute epic, it is the longest track in the band's history so far, surpassing "Rime of the Ancient Mariner" by three minutes.

The lyrics are about the ill-fated British airship, R101, which was the world's largest flying craft when it was built. It crashed in France on its maiden overseas voyage on October 5, 1930, killing 48 of the 54 passengers on board.

It was written concurrently with another song with an aircraft theme, the WWI aerial battle tune "Death or Glory". Once Bruce Dickinson finished that, he still had the "Mist is in the trees" stanza, and decided to write about the R101, to which he has some memorabilia. Given the guide book for the tragedy has 600 pages, no wonder the song seemingly never ends.

The song was composed entirely on a piano, and due to a plethora of factors (too long, too complex, too slow, not rocking enough) it wasn't even considered for The Book of Souls Tour. Bruce thinks it might work with a one-off performance, possibly counting with orchestra backing, along with actors and footage on screens "so you could actually really get the full sense of the tragedy and the drama that was going on behind the scenes".

Every single day we'd be in the studio blasting out stuff and [Bruce] would be in the soundproof glass booth playing piano. Like Beethoven with his ear to the piano, concocting this masterpiece. I think he wrote every single note in it. We interpreted it and we did it in sections. Kevin [Shirley, producer] and Bruce would be in the control room and say, 'That's too bluesy, can you make it a bit more classical sounding?' He recorded all the piano from start to finish and then we played along to that. Then I think they put on all the orchestration afterwards. It's a bit of a story on its own that one.

-Adrian Smith, on the writing process

The R101 was one of a pair of British rigid airships completed in 1929 as part of a British government programme to develop civil airships capable of service on long-distance routes within the British Empire. It was designed and built by an Air Ministry-appointed team and was effectively in competition with the government-funded, but privately designed and built R100. When built it was the world's largest flying craft at 731 ft (223 m) in length, and it was not surpassed by another hydrogen-filled rigid airship until the Hindenburg flew seven years later.

It crashed on October 5. 1930 in France during its maiden overseas voyage, killing 48 of the 54 people on board. Among the deceased passengers were Lord Thomson, the Air Minister who had initiated the programme, senior government officials, and almost all the dirigible's designers from the Royal Airship Works. The crash of R101 effectively ended British airship development, and was one of the worst airship accidents of the 1930s. The loss of life was more than the 35 killed in the highly public Hindenburg disaster of 1937, though fewer than the 52 killed in the French military Dixmude in 1923, and 73 killed when the USS Akron broke up over sea in 1933. 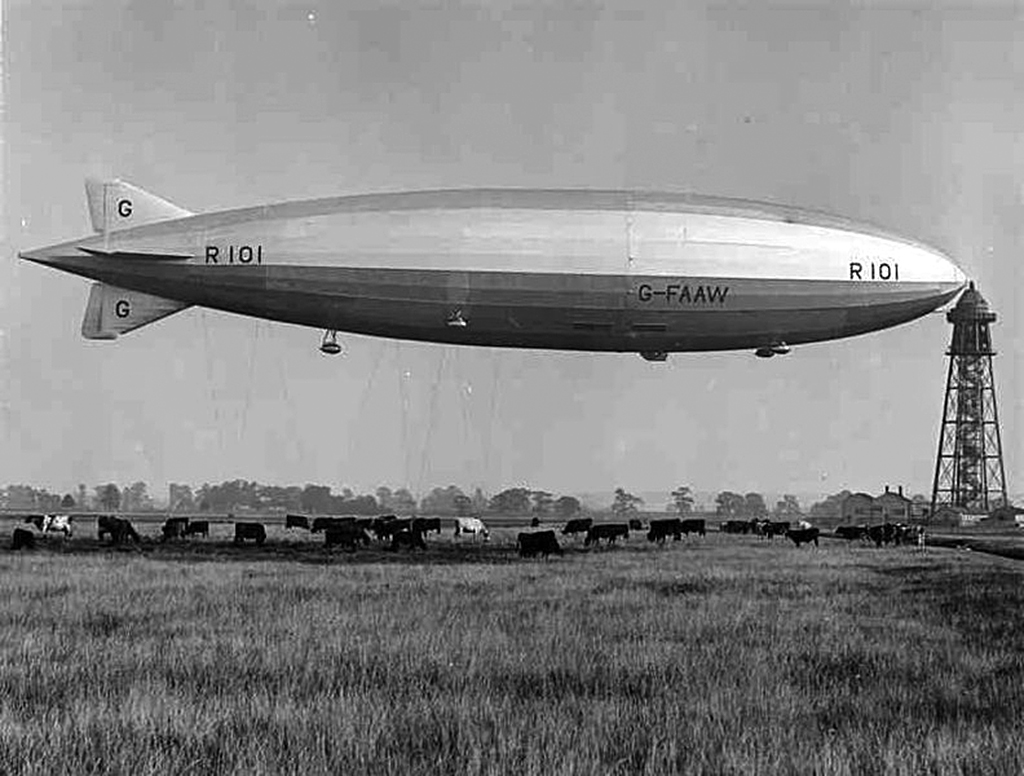