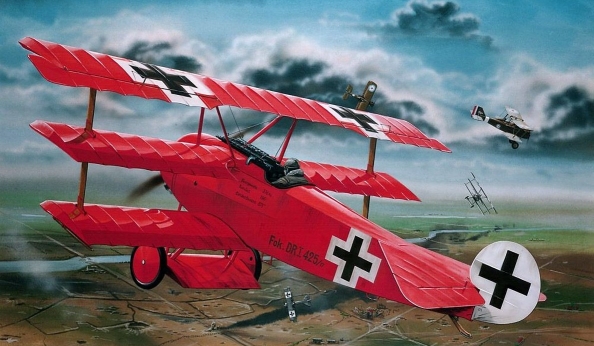 "Death Or Glory" is the 7th song from Iron Maiden's album The Book of Souls. 20 years after "Aces High", the band again discusses aerial dogfights, only this time they're the ones from the previous World War. Ironically, the to-the-point 5 minute rocker started with a stanza of what would become the near 20 minute epic that closes the album, "Empire of the Clouds".

All I had was two or three little pieces written for separate things, actually, and one of them had a line, "Mist is in the trees, stone sweats with the dew/The morning sunrise, red before the blue," and it was, basically it was setting a scene: this is dawn, something is gonna happen. And the idea was, yup, it's gonna be World War I fighter airplanes take off, and they'll die horrible deaths and a song about that.

On July 6., 1917, during combat with a formation of F.E.2d two seat fighters of No. 20 Squadron RFC, near Wervicq, Manfred von Richthofen, the Red Baron, sustained a serious head wound, causing instant disorientation and temporary partial blindness. He regained consciousness in time to ease the aircraft out of a spin and executed a forced landing in a field in friendly territory. The injury required multiple operations to remove bone splinters from the impact area.

The Red Baron returned to active service (against doctor's orders) on July 25., but went on convalescent leave from September 5. to October 23.. His wound is thought to have caused lasting damage (he later often suffered from post-flight nausea and headaches) as well as a change in temperament. There is even a theory linking this injury with his eventual death.

A full list of the aircraft the Red Baron was credited with shooting down was published as early as 1958 – with documented RFC/RAF squadron details, aircraft serial numbers, and the identities of Allied airmen killed or captured: 73 of the 80 listed match recorded British losses.

A study conducted by British historian Norman Franks with two colleagues, published in Under the Guns of the Red Baron in 1998, reached the same conclusion about the high degree of accuracy of Richthofen's claimed victories. There were also unconfirmed victories that would put his actual total as high as 100 or more.

Turn like the devil, shoot straight from the sun
Climb like a monkey out of hell where I belong

The Red Baron, Baron Manfred von Richthofen, the staunchest advocate of triplanes claimed that his triplane could "climb like a monkey and maneuver like a devil."

Richthofen was trained by German ace Oswald Boelcke who composed a list of guidlines to aerial combat. The "Dicta Boelcke" states in it's first rule that you should allways attack from the sun.

At the time, the Baron had been pursuing (at very low altitude) a Sopwith Camel piloted by a novice Canadian pilot, Lieutenant Wilfrid "Wop" May of No. 209 Squadron, Royal Air Force. In turn, the Baron was spotted and briefly attacked by a Camel piloted by a school friend (and flight commander) of May's, Canadian Captain Arthur "Roy" Brown, who had to dive steeply at very high speed to intervene, and then had to climb steeply to avoid hitting the ground. Richthofen turned to avoid this attack, and then resumed his pursuit of May.

It was almost certainly during this final stage in his pursuit of May that a single .303 bullet hit Richthofen, damaging his heart and lungs so severely that it must have caused a quick death. In the last seconds of his life, he managed to retain sufficient control to make a rough "landing"( 49°55′56″N 2°32′16″E) in a field on a hill near the Bray-Corbie road, just north of the village of Vaux-sur-Somme, in a sector controlled by the Australian Imperial Force (AIF). Several witnesses, including Gunner Ernest W. Twycross, Gunner George Ridgway, and Sergeant Ted Smout of the Australian Medical Corps, all later claimed to have been the first man to reach the triplane and reported various versions of Richthofen's last words, generally including the word "kaputt."