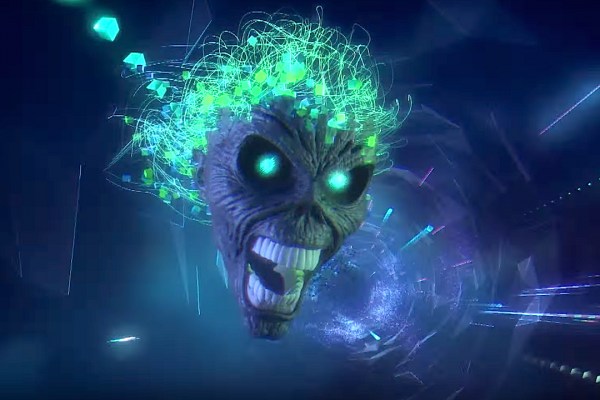 The leading single out of The Book of Souls, featuring a really cool music video featuring Eddie going through the story of both video games and Iron Maiden.

The lyrics are about traveling through space at the speed of light and going to where no-one has ever gone before.

The music video was produced by Llexi Leon, creator of the comic book series 'Eternal Descent' and big Iron Maiden fan. He told Metal Hammer the following about how the video came about:
It seemed a perfect fit — 40 years of metal explored alongside four decades of video games. I pitched this idea to [Iron Maiden manager] Rod Smallwood and the guys in the band. They loved the concept and asked if I could pull it off. I figured it was Iron Maiden, so I had to pull it off, and it had to be the best thing I've ever done. The video is littered with nods to Iron Maiden artwork — whether it's the poses of the characters at certain key moments, or imagery woven into the background art. There's a lot to look out for in the video.

Other lyric references lead to a Black Hole experience: Black holes are possessed of such super-massive gravity that they distort time and space. Some astrophysicists have theorized that black holes might be wormholes to other times and places.

Fun fact, due to the extreme time-dilation of the event horizon of a black hole, if you were to fall into one, you would, as you reached the event horizon, observe time in the universe around you outside of the black hole speed up to infinity. You'd get to see the whole life of the universe play out in fast forward before your eyes.