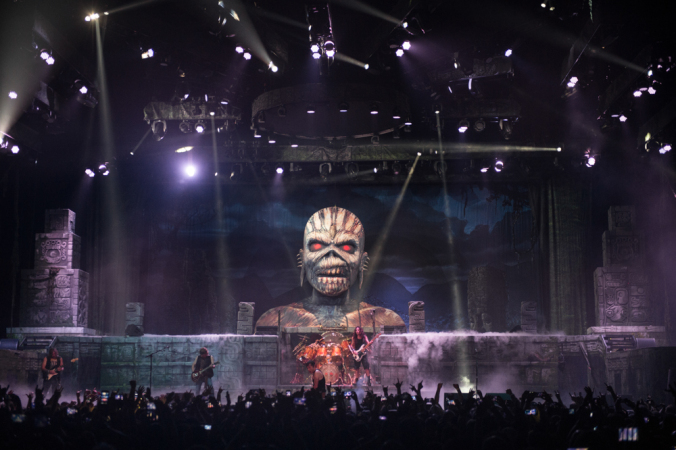 Iron Maiden's intention to tour in support of The Book of Souls was confirmed with the album's announcement on 18 June 2015. The band's touring plans had to be delayed until 2016 to allow vocalist Bruce Dickinson to recover following treatment for a cancerous tumour found on his tongue. The tour was officially announced with a press release on 25 August, which included a general outline of the band's itinerary with specific dates to be confirmed. Starting in February, the band will visit 36 countries throughout North and South America, Japan, China, New Zealand, Australia and South Africa, before finishing in Europe in August. The band's dates in China, El Salvador and Lithuania marked their debut visits to those countries, while their South African shows were their first with Dickinson as vocalist (having previously toured there in 1995).

The first dates to be confirmed were the band's shows in New Zealand, Australia and South Africa, announced 14 September 2015. On 1 October, the group released their US itinerary, which highlighted their Fort Lauderdale performance as the tour's opening concert, with an additional night in Los Angeles added on 13 October. This was followed by their Central and South American dates on 5 and 6 October, which included the announcement of their first ever performance in El Salvador, their Canadian performances on 8 October and an additional show in Mexico City on 26 October. On 12 January 2016, the band announced their debut performances in China in Beijing and Shanghai, followed by the confirmation of their return to Japan, after an eight year absence, with two nights in Tokyo. The band's debut in El Salvador was reportedly the largest event in the history of the country, with an attendance of 25,000, and the group received a special thanks from the Ministry of Tourism.

As with their 2008, 2009 and 2011 tours, the band travelled on their own aircraft, nicknamed "Ed Force One" after the band's mascot, Eddie, although this time using a Boeing 747-400 jumbo jet, provided by Air Atlanta Icelandic, rather than the smaller Boeing 757s which they had previously used. According to Dickinson, a qualified pilot who captained the aeroplane, the larger 747-400 meant that the band were able to travel at faster speeds and for longer periods and were able to carry their equipment without the plane having to undertake extensive modifications, as they had to do with the 757s. Ed Force One carried the band, their crew and over 12 tons of equipment for all of their shows up to and including their concert in Gothenburg, Sweden on 17 June. On 12 March, the plane was involved in a collision with a tow truck on the ground at Comodoro Arturo Merino Benítez International Airport in Santiago, Chile, while being towed for refuelling, injuring two ground tug operators as well as damaging the aircraft's undercarriage and two of its engines. The band made contingency plans to ensure that their schedule was unaffected as the repairs were carried out, which Dickinson stated would take two weeks. On 21 March, the band reported that the repairs had been completed and that Ed Force One would rejoin the group for the remainder of the tour.

The Raven Age throughout the tour.
Anthrax in Mexico, El Salvador, Costa Rica, Chile, Argentina, Brazil and Poland.
Araña in El Salvador.
Ghost in Berlin, Norway and Denmark.
Opeth in Sweden.
Sabaton in Finland and Slovakia.
Stratovarius in Finland.
Amon Amarth in Finland.

Tying in with the album's title and theme, the stage set was decorated in a manner which mimics Maya architecture. The band's mascot, Eddie, in his Mayan guise from The Book of Souls album cover, appeared at two points during the show: as a walking puppet during "The Book of Souls" and as an inflatable head during "Iron Maiden". In addition, an inflatable goat/devil appeared during "The Number of the Beast".

Speaking about the setlist prior to the tour, guitarist Janick Gers stated that the band will play "six or seven" tracks from The Book of Souls and "pepper it with older songs so everybody gets to enjoy the gig." Gers also suggested that "Hallowed Be Thy Name" (from The Number of the Beast, 1982) would return to the show, following its absence during the Maiden England World Tour 2012-14, and that "The Trooper" (from Piece of Mind, 1983) would also be performed. In an additional interview, Bruce Dickinson revealed that either "Run to the Hills" or The Number of the Beast" (both concert staples from The Number of the Beast) would be excluded.[

The Book of Souls World Tour

The Number of the Beast
Blood Brothers
Wasted Years

• "Powerslave" and "Children of the Damned" returned to the band's setlist having last been played in 2009.
• Setlist regular "Hallowed Be Thy Name" also returned after its notable absence during the Maiden England World Tour 2012-14.
• This is the first time that "Blood Brothers" and "Wasted Years" have been played as encores, while it is the first time that the latter has been used as a closing song.