The Artwork for The Final Frontier album

It is easy to say that the cover of "The Final Frontier" is one of the most discussed since the "X Factor”. The truth is that we can say the same about the covers of "Virtual XI", "Dance Of Death", and even "A Matter of Life and Death". Because of Derek Riggs’s artworks, the fans have developed a clear image of Eddie that the line between good and bad in other arts is quite noticeable. When I saw, the "thing" that was supposed to be on the cover, I was left with quite mixed feelings, but like every other Maiden stuff, I learned to give it more time. 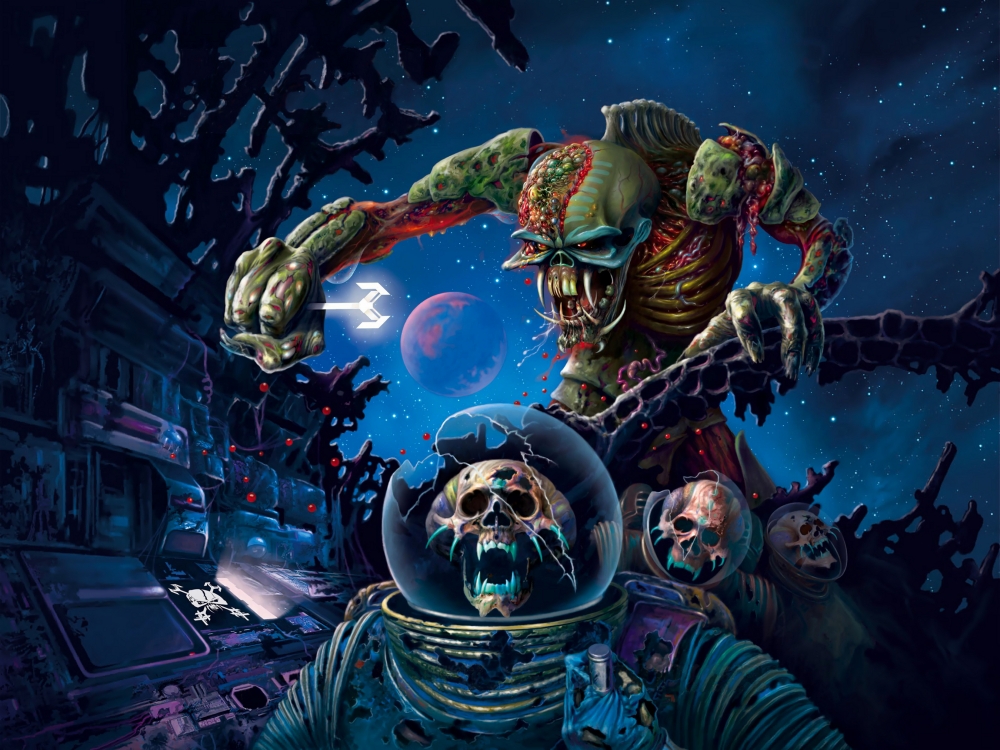 The artwork for "The Final Frontier" was done by the well-known artist Melvyn Grant, who worked for Maiden on the covers of "Fear Of The Dark", "Virtual XI", "Death on The Road", "From Fear To Eternity" and the single "The Reincarnation Of Benjamin Breeg”. Grant himself admits that Riggs's style of artwork never appealed to him and he wanted to come up with his own version of Eddie as much as the band and management allow it. This, of course leads to brilliant results such as "Fear Of The Dark" and quite controversial ones like "Virtual XI" and "The Final Frontier".

An illustrator I know, who already did several event t-shirts for our club, showed me something quite strange. Grant's not-so-surreal Eddies look a lot like an angry monkey or the creatures that Larn was fighting in the legendary animation Fire and Ice. I have not thought about it, but it's definitely something that comes to mind whenever I see the specific artworks.

Let's get back to the topic. What the hell is that on the cover of "The Final Frontier" after all? In a interview for Examiner Magazine, Grant explains that for the first time, this is not Eddie, and it is actually an alien, and that "The old Eddie might still come around. " Unfortunately, the whole concept of the album and tour revolves around this creature, which somehow was the new incarnation of Eddie – a mix between The Predator and Alien.

The initial sketches and drawings that Grant did for the „Predator Eddie“ were liked by the band and especially Rod Smallwood. The theme of the album was space, so Maiden came up with the idea of Eddie doing something on a spacecraft. Originally, they didn’t want the craft all ripped to shreds, but to look like a hatch had come off and Eddie to be slithering in among the skeletal crew. However, gradually, the artwork molded into the more brutal one, which is what we see now. 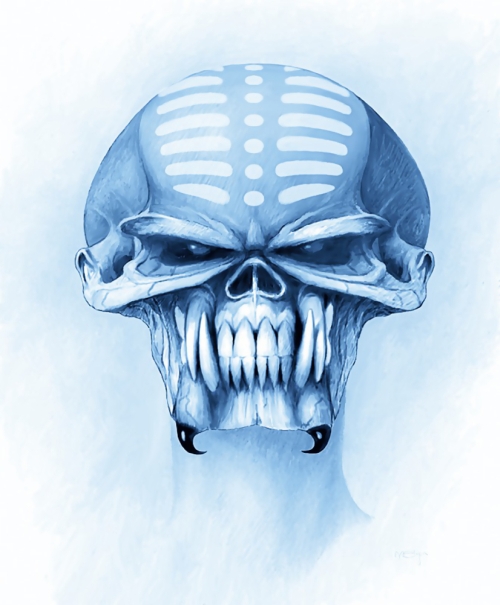 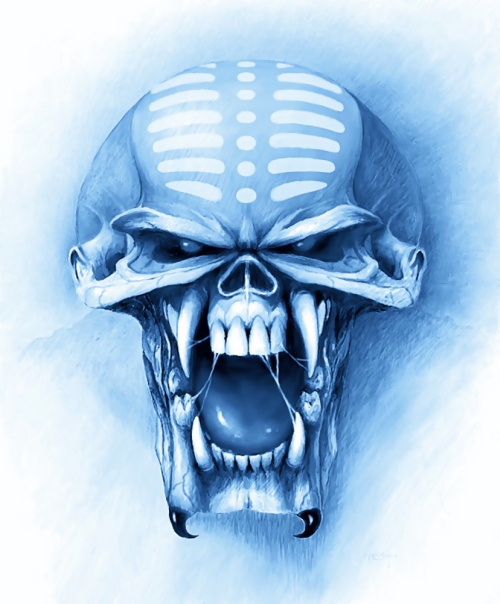 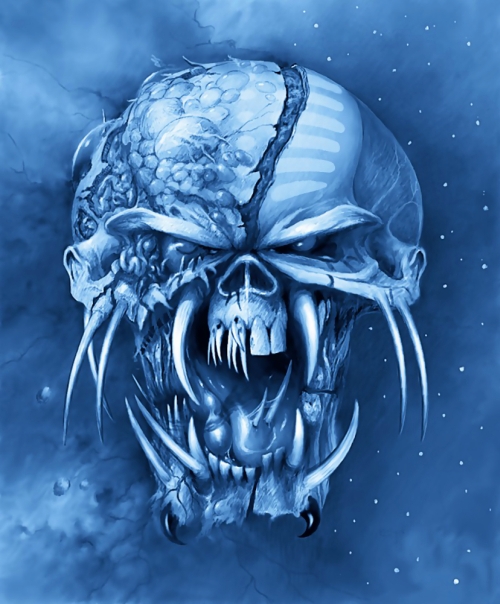 As we can see in the first sketches, the creature has a much more “healthy” looking face, but the band asked Grant to add all these wound and burn effects to it. Probably at this point came the the idea and the script for the video of the title song "The Final Frontier". In the same video we can see Eddie and a space pilot chasing each other and fighting over an alien artifact. This also explains the strange object in Eddie's hand, it is some sort of key.

Another interesting fan discussion around the cover was the fact that the skeletons in the spaceship are definitely not human beings, and the style of the spacesuits makes a reference to graphic novels of the 50s and 60s. I was absolutely delighted with the singles and promos that came out with this album. Their artworks were in exactly this retro comic style and were something that fans never saw before with Maiden. For me, they were quite interesting and refreshing. Young illustrator named Anthony Dry, who also did some illustrations for BBC’s “Doctor Who”, did all these artworks. 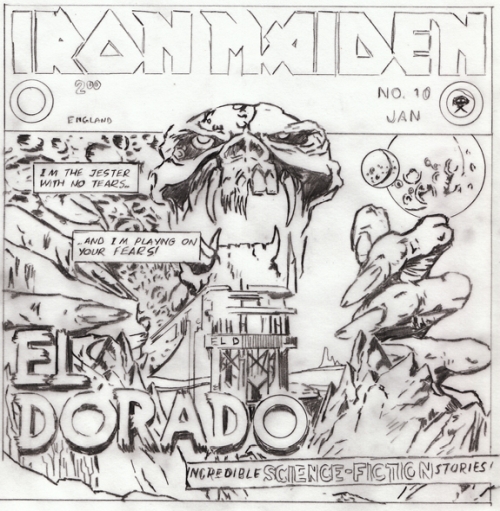 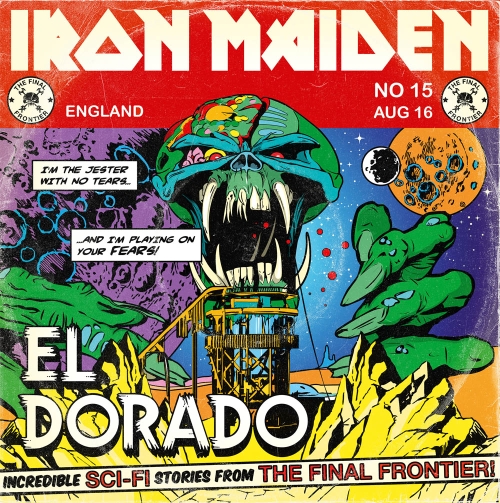 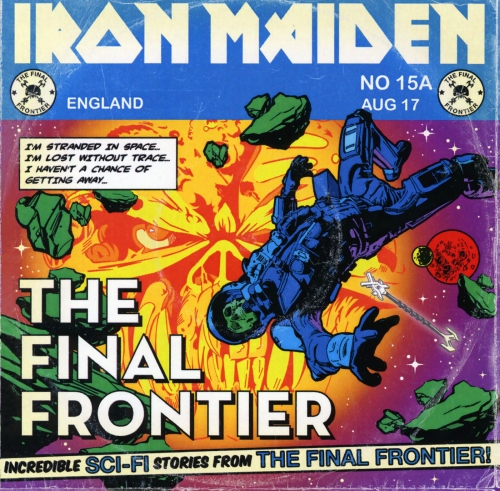 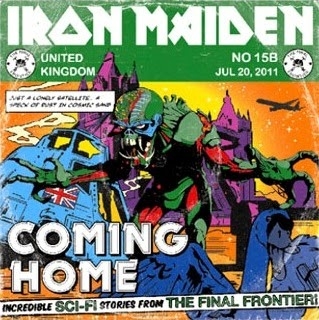 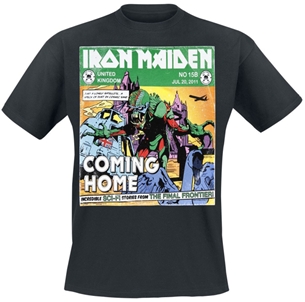 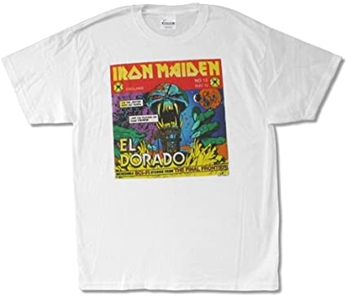 EL DORADO was officially released on June 8, 2010 for free download, and physical copies of the single were only sent to selected media. The other two artworks were also used only for promotional CDs to various media. This is the reason why currently physical copies of the singles are quite rare and expensive. At some point, the band released T-shirts with the artworks from “El Dorado" and "Coming Home", which….let’s admit it: They look ridiculously stupid on something other than a disc or vinyl.

In this period, we often see the minimalist crossed keys art, which is used simply as a symbol, similar to the crossed Guns from "A Matter Of Life and Death". 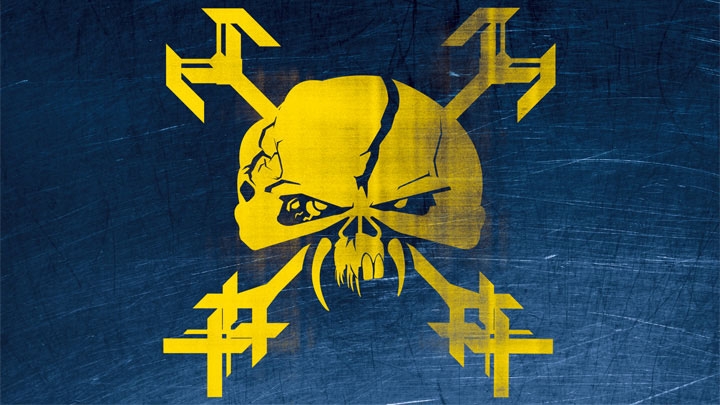 During The Final Frontier tour, we also see some great event t-shirt artworks done by Herve Monjeaud. Surprisingly the predator from the front cover is just hinted here and there, but overall we get the classic Eddie. Looks like the old Eddie “came around” after all. Herve has proven to be the exact opposite of Grant, and his Eddies strictly follow the path of the Riggs’s artworks, they even carry specific references to things the maestro had already done. Personally, it is surprising to me that there aren’t more album covers (except for the reissue of Maiden England 2013) done by Herve, who seems to be focused mainly on event artworks. 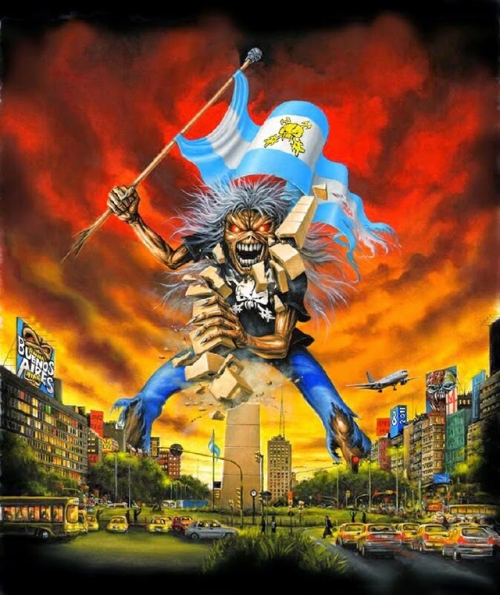 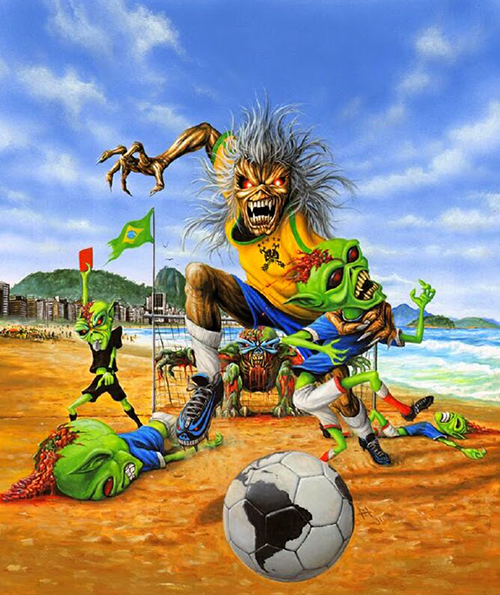 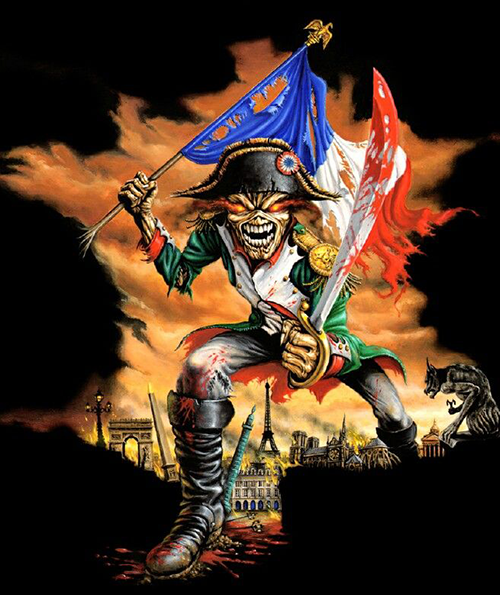 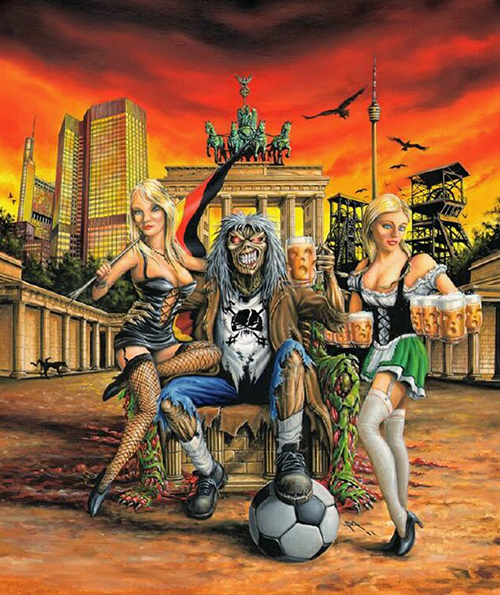 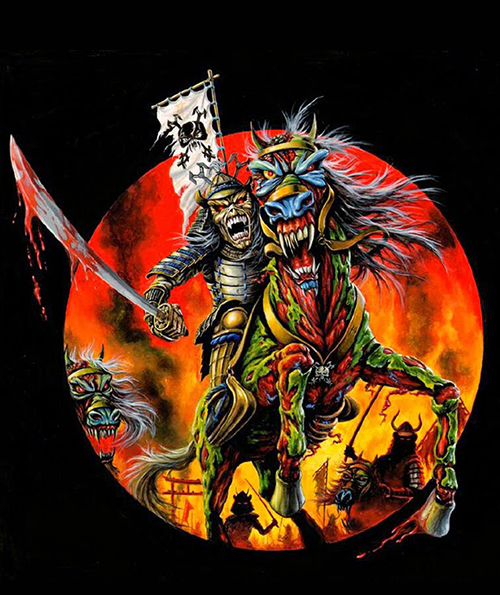 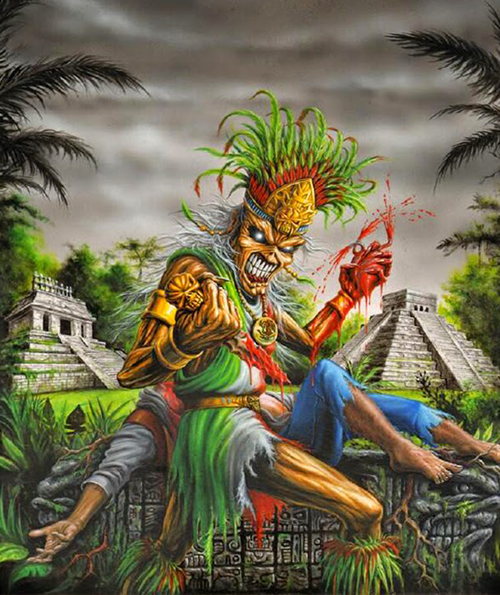 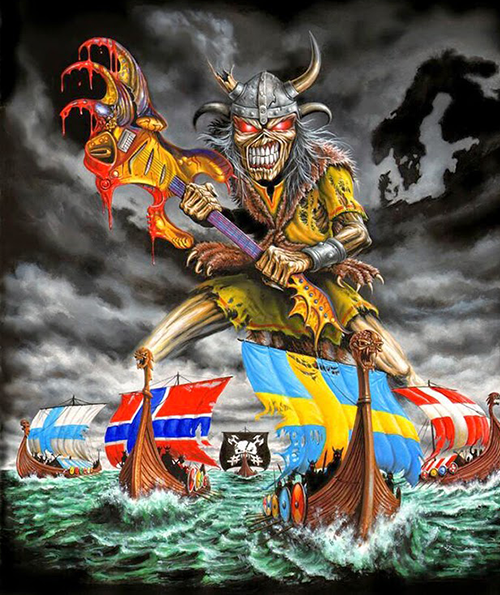 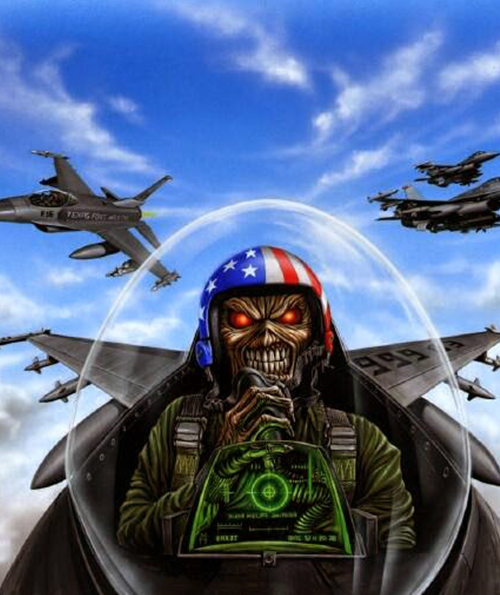 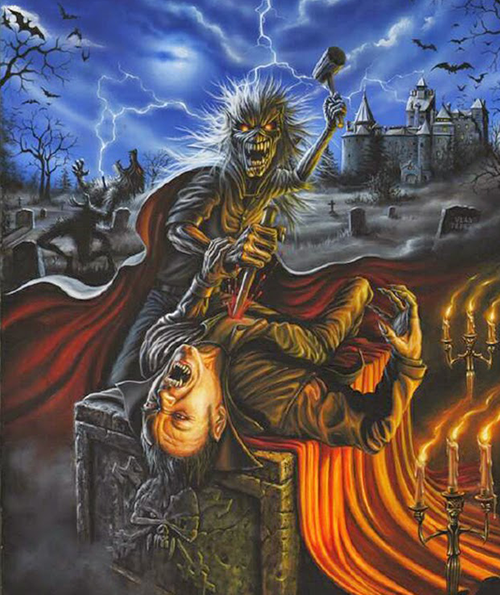 Disappointing or not, the artwork for “The Final Frontier” will remain a notable part of the band's history. Mel Grant also remains a great artist, but as some of the band's older fans say: ... "We're too old for new things!" And as I said at the beginning, Maiden fans will immediately tell the difference between good and bad cover Artwork...

The album's booklet has several sketches and illustrations by Melvyn, which leave us with a raised eyebrow, and we can be thankful that they didn't end up on the front cover. 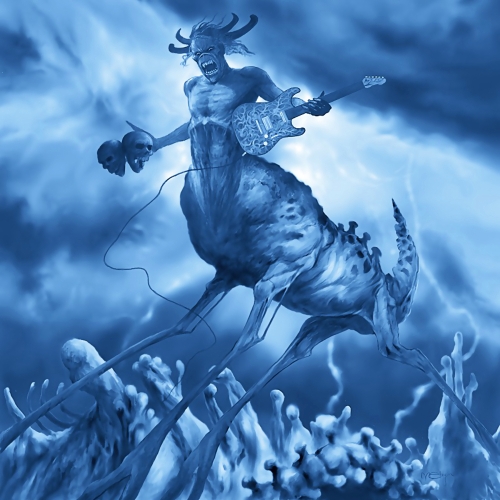 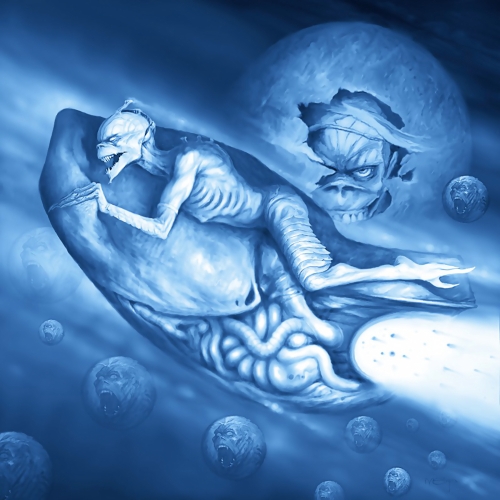 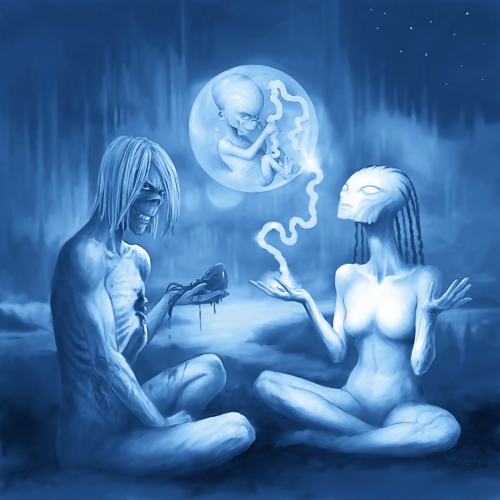 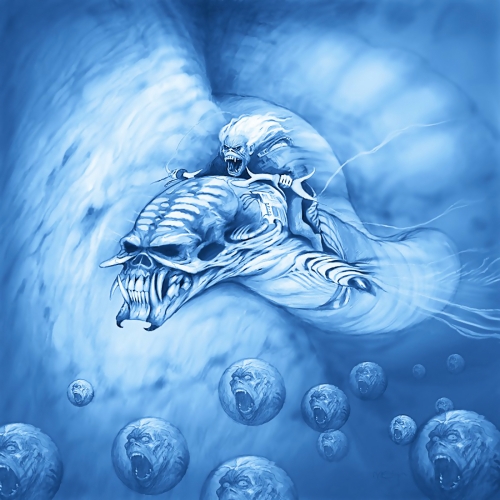