THE FIRST TEN YEARS: THE VIDEOS 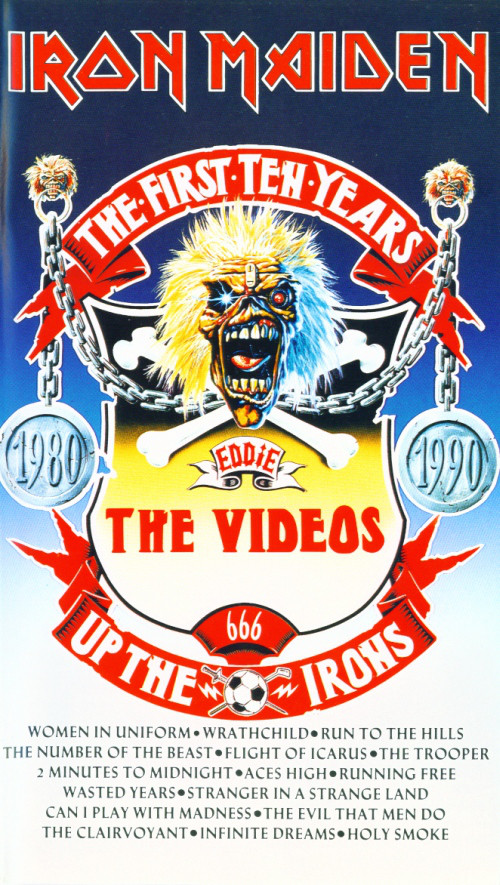 All the Iron Maiden video clips from 1980 to 1990 have been collected in this 73-minute video. Most of them can be found on the Visions Of The Beast compilation released in 2003.

In the ten years since the release of their first single on EMI, "Running Free", in February 1980, Iron Maiden have had twenty consecutive chart singles in the UK, with their 20th and most recent, "Holy Smoke", debuting at No. 3, the highest debut ever for a rock band. Sixteen of these singles became videos, which are all contained in this first ever full collection of Maiden videos. From "Women in Uniform", filmed in July 1980 at London's Rainbow Theatre as one of the first ever promotional videos made before video really became almost compulsory for a band, through to the Steve Harris filmed and directed "Holy Smoke", this collection gives a comprehensive look at the history of the band. Through a number of line-up changes, various locations around the World from Poland to the Bahamas to Los Angeles, with ever more spectacular stage productions, and shot everywhere from a small gig to Donington in front of over 100,000 fans, from rehearsal studios to recording studio, the band always delivered blazing performances. This collection gives the definitive visual history of one of the World's greatest rock bands.

Back of the box