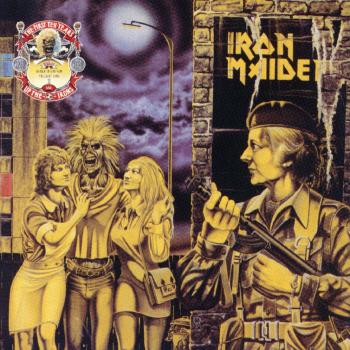 Women In Uniform was Iron Maiden's third single. It is also the only single in Maiden history that is actually a cover song, and the last with guitarist Dennis Stratton. The single also features another great Derek Riggs sleeve, where a resurrected Margaret Thatcher waits in ambush for Eddie and his girlfriends. The question is, what is Margaret's motive, revenge or jealousy? In any case, the single made it to 35 on the U.K. charts.
Rod Smallwood's comments are taken from the Best Of The B'Sides album booklet included in the Eddie's Archive box..

Women In Uniform (Macainsh)
Skyhooks single Skyhooks album This cover song was originally recorded by an Australian band called Skyhooks in 1979. The original song had a little spoken intro that Maiden didn't use. The intro went as follows:

It is a rather shallow little womanising song that does not match Maiden's style and, against their better judgement, the band was convinced by their publishers (Zomba) to release it as a single in the hopes of generating a hit a decision that the band has regretted ever since. 'Women In Uniform' also became the band's first video, a live production on stage at the Rainbow..

'Invasion' is another of Harris's early compositions and was first recorded on the legendary Soundhouse Tapes. It is a great song about a Viking invasion, which later evolved into 'Invaders' on the Number Of The Beast album. In contrast to the relatively lame 'Women In Uniform', 'Invasion' is an excellent song with a great guitar solo and a catchy tune that can stick in your head for days. It definitely should have been the A-side of the single. This is a faster re-recording of the original Soundhouse version, but it's difficult to tell which version is better.

Phantom Of The Opera (live) (Harris)
This live version of the classic 'Phantom Of The Opera' was recorded at the Marquee Club in London on 4th July 1980. It is predictably excellent there probably isn't any version of 'Phantom' that isn't excellent. What can we say, this is one of Maiden's all-time greatest songs.