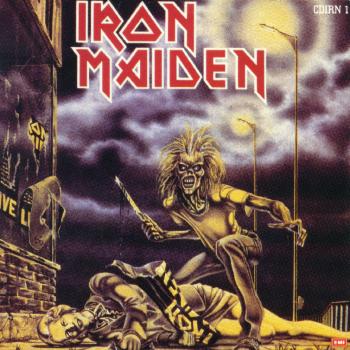 'Sanctuary' first appeared on the Metal For Muthas compilation, but was released again as a single a few months later after the release of the first album. However, this version of 'Sanctuary' was a new and better recording of the original song, which rose as high as 29 in the U.K. charts. The Sanctuary single sleeve picture also supposedly exposed the band to their first taste of public controversy, with its depiction of Eddie wielding a knife over the dead body of Margaret Thatcher who had presumably been caught in the act of tearing down an Iron Maiden poster. Maggie Thatcher was the Conservative Prime Minister of Great Britain at the time, and had been nicknamed the "Iron Maiden" by the press after her tough negotiations with the Soviet Union. So in a sense the Sanctuary sleeve was a mild pun linking this political 'Iron Maiden' with the musical Iron Maiden. However, it was viewed as particularly bad taste by the British media, and, according to the legend, drew condemnation from Margaret Thatcher's spokesman.

According to the official Iron Maiden biographywritten by Mick Wall, the sleeve picture was censored on most of theSanctuary singles with a black bar over the face of the slain woman,thus masking her identity. Still, a great deal of controversy was saidto have been generated, which predictably only served to provide freepublicity for the band.

However,in an interview given in May 2001 to www.ytsejam.com, Derek Riggs wasasked if he had taken any flak from the media about this, along withthe band. He then declared:

"The"flak" for that single (Margaret Thatcher being knifed by Eddie, fromthe song lyric "[I've] never killed a woman before but I know how itfeels" lovely state of mind...) was invented by the band's management.They "banned" it and they put the black square over her face and thenthey showed it to the press and cried "censorship", but there reallywasn't any. The flak was all imaginary and self-generated forpublicity. It's an old trick and it nearly always sells records... goand ask all the rappers who swear on their records all the time, if itdepressed the record sales they would soon stop doing it."

Thisexplanation would indeed make sense considering what a shrewdbusinessman Rod Smallwood is. Besides, it is quite unlikely that Riggsywould lie about this story some 20 years later, even considering hisfallout with Maiden.

Sanctuary (Harris, Di'Anno, Murray)
This is the same version of the song as on the 1998 re-release of the Iron Maiden album.

This live version of 'Drifter' was recorded at the Marquee Club in London on 3rd April 1980. It is a song that is at its best when played live and has been a part of Maiden's tour set for many years. It very often features the audience interaction part of the show, with the familliar "yo yo yo" routine. At the end of this recording something strange is shouted to the crowd, which is NOT a backward message although it does vaguely sound like one. RealAudio samples of this are available here.

Cracking live version of this Killers track which was used to close the show as the last encore on the 'Killers' tour.

I've Got The Fire (live) (Montrose)
Montrose Paper Money 'I've Got The Fire' is a Ronnie Montrose song from his 1974 album Paper Money, which was first recorded with Sammy Hagar (who also wrote the lyrics to the song, but who wasn't credited for some obscure reason). It is well known that Steve Harris and Dave Murray were both big Montrose fans, so playing a cover of this band is no surprise, as they needed to add a few cover songs to make a complete set at the time.
This version by Iron Maiden was, like 'Drifter' on the same B-side, recorded live at the famous Marquee Club in London on 3rd April 1980. It's an energetic song with another great guitar solo and it makes an excellent B-side, showcasing perfectly Maiden's early sound and style.