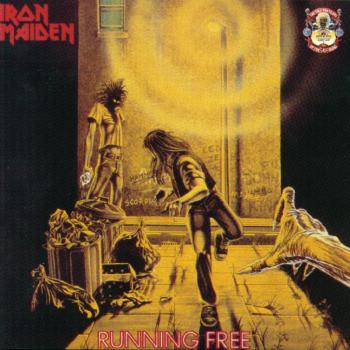 Running Free was Iron Maiden's first single, which sold over 10,000 copies in its first week and entered the UK charts at number 44. This is a particularly significant accomplishment for a relatively unknown band with no radio airplay whatsoever. This was Maiden's first recorded release after their legendary Soundhouse Tapes, and was very closely followed by Metal For Muthas. The cover of the single has particular significance as the first artwork for the band by Derek Riggs. This is the very first drawing of Eddie!
Rod Smallwood's comments are taken from the Best Of The B'Sides album booklet included in the Eddie's Archive box.

Running Free (Harris, Di'Anno)
This is the same version of the song as on the Iron Maiden album.

This is one of Harris's earliest songs, written around the time when he was in Gypsy's Kiss. However, the other musicians couldn't handle the complex chord and time changes in the song, and after a few gigs the band sort of dissolved. It's actually quite a good song with a great guitar solo, and in hindsight it is not surprising that the teenager who could write such a good song would go on to accomplish so much.

The first track Steve ever wrote completely by himself. The title and lyrics obviously have a lot of significance in terms of Steve's attitude to the band and everything we've achieved over the last 20 odd years. This was the days of a 7" piece of plastic with one B-side and a paper cover. Also it was on the artwork for this single that Eddie made his first appearance albeit in the shadows!!