At the end of the 1960s, many teenagers discovered a new musical style, an anti-cerebral sound whose energy was entirely concentrated into the instruments and whose power was proportional to the length of the musicians' hair: Hard Rock. Its worthy representatives were then bands like Deep Purple and Led Zeppelin. Then, Heavy Metal music started to spread, both in the States and in the UK, thanks to bands such as Aerosmith, Bad Company, Blue Oyster Cult, Black Sabbath, or Status Quo, to name but a few. Recently, a third generation has appeared and Hard Rock became universal, with bands stemming not only from Anglo-Saxon countries, but also from Australia, Germany, Canada, and even France. Their names are AC/DC, Saxon, Offenbach, Judas Priest, Motorhead, Trust or, like the most recent one from Britain, Iron Maiden, and they carry the torch along. We met Steve Harris, bass player and founder of Iron Maiden, during his stay in Paris on their French tour. 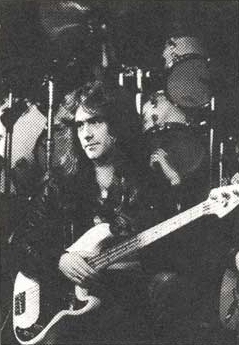 How is the French tour going?

So far, the reaction was fantastic. We had already played in Paris and Lyons when we were opening for Kiss, but this is our first headline tour in France. The French audiences don't react as strongly as those in the UK, but that's probably due to the fact that they don't us very well yet. Over there, we've done already four tours and people know most of our songs and sing along during the show.

Tell us about the beginnings of the band.

It was hard! I started five years ago in the East End of London. At that time, I couldn't find any musicians or contracts so, with Dave Murray (guitar) and Paul Di Anno (vocals), we used to play in East End pubs that don't exist anymore, or even in clubs. Then we signed with EMI, right in the middle of the Punk era. Our chances seemed pretty slim, but our first single, Running Free, had nonetheless a fair amount of success, which allowed us to release our first album, Iron Maiden.

I had the idea when I saw a film in which there was a torture instrument called an iron maiden, some kind of coffin with sharp spikes on the inside, that closes on its victim. I thought it fitted well to the music I was writing (Note: Steve Harris write almost all the songs of the band) and, as I love horror films, this is mainly where I get my inspiration from. This is how I wrote 'Murders In The Rue Morgue' or 'Phantom Of The Opera'. We play an aggressive music and I chose this theme, the horror depicted at the cinema or in comics, like others choose hell, for instance. And I think that this is why the kids have a great time with us.

The cover of your latest album, Killers, is particularly violent: it shows some sort of zombie wielding a bloodied axe.

Yes, but there again this is done in the spirit of comic strips. Derek Riggs painted this cover and I think that he understands very well what our style is about. We even had a mask made from this cover and we use it during the show. Killers is doing really well. We recorded it in February, just before the release of the Judas Priest album, with whom we toured the UK. It went to Number 4 in the charts. This is partly due to out producer, Martin Birch, who also worked with Deep Purple. He simply found the right sound for us. 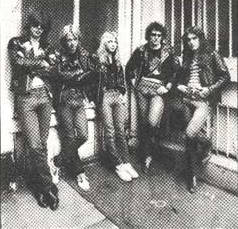 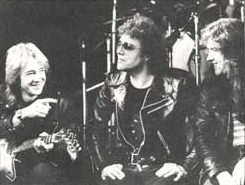 What are your plans for the future?

Right now, we're on tour until the end of August, which is why we had to put the recording of our third album on hold. Things have been looking up for us in the past fifteen months, but we've been on the road for four years as semi-professionals. We have a massive on-stage experience and we love it. I think that our fourth album will be a live one...