The release of Paul Di'Anno's autobiography, The Beast, marked for him the end of an era and was the opportunity to ponder his life and career. We caught up with him in Belgium, on 12th October 2002, to ask him a few questions on his current state of mind and his plans for the future..

With hindsight, what do you think about your book?

I don't really know. I'm happy it's out. Well, I'm not really sure... It's not something I did easily. It was very personal. Everybody knows my music, so it wasn't a major part of the book. I preferred to focus on my private life. Come to think of it, I shouldn't have... But it was for me the end of a chapter 'cause my life is very different now. I'm very quiet, well I am, compared to what I used to be like. I don't do drugs anymore, I've become more relaxed. I'm not as crazy as I used to be: I have lots of fun on stage, then I go home and stay with my kids. My life has changed so much. For the best, I hope. In fact, it was my kids and my ex-wife, Berverley, who told me that I should bury my past. When you want to get rid of your problems, you have to talk about them. And that's what I've done: I agreed to do that book. But it wasn't easy... 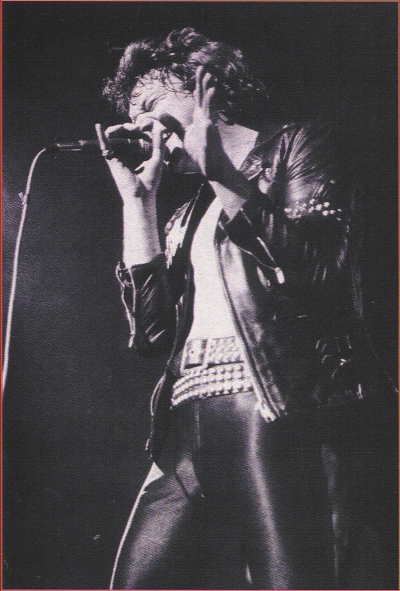 What are your best and worst memories of when you were with Maiden?

The best ones? Hmm, that we were basically touring the whole time and of course when with signed with EMI. That was absolutely fantastic. Also the day our first album hit the UK charts. The worst? That's when the atmosphere changed, when Rod, Steve and Dave took over control. I thought the band was going to remain democratic, as it was the case in the beginning. But on the other hand, as it was Steve who'd founded the band, it maybe was inevitable. He sometimes said things that divided Maiden a bit and I've felt uneasy several times. But, to be honest, that's about it: I never really had bad times with the band. And when I left, I forgot about it, it wasn't important to me. It's when I wrote this fucking book that I had to dig into old memories.

Do you consider the label "ex-Iron Maiden singer" a blessing or a burden?

It's a burden... It mattered to me in the way that it made me famous all over the world. But that was only a short period of my life. What really matters to me is to be able to play music and to perform live. But even when I sing Maiden songs, I consider them mine, they sound different, mostly with Killers, 'cause they're heavier and more aggressive. If I thought that Maiden was the most important thing in my life, I'd have quit a long time ago. But it ain't going to happen, I have loads of plans for the years to come. Killers is going to release a new CD and we'll start touring next year. I am also going to work with my solo band (we already have nine new songs and we're working on another three). The line-up will also change as compared to the one that featured on Nomad. This time, we'll stay based in England and not in Brazil. So we'll be able to play a lot more in Europe and perform Nomad songs on stage. I've slightly changed the way I sing – it's more melodic while remaining quite heavy. The first song we wrote, 'The Breeze' is great, it creates a very special atmosphere. I also have my Punk band, Almighty Inbredz, with which I'm thinking of giving a few gigs in England and Wales. With Colin Holton, my guitar player, we're trying to set up and produce a Punk festival for next year with Inbredz and our friends from UK Subs and Chelsey. I'll also ask Anti-Nowhere League and The Exploited to participate. Like this, we'll be able to get a bit of money for our charity in Salisbury, Kids Like Music, and maybe a bit for ourselves too.. 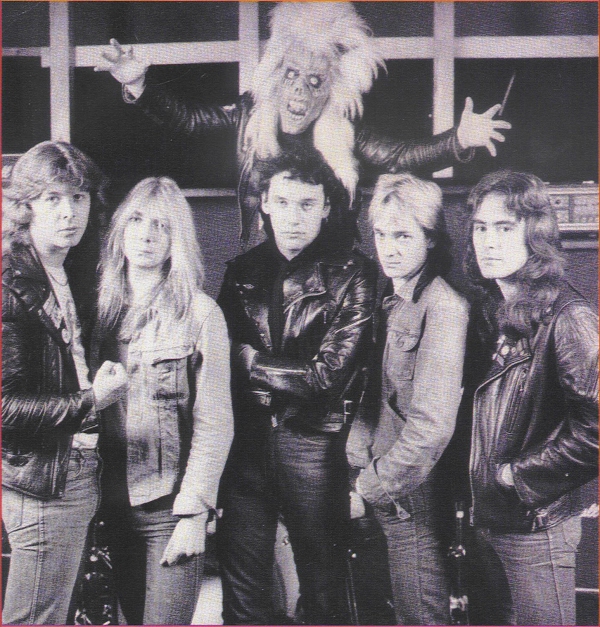 Did anyone from Maiden and their management say anything after the release of Beast Live? 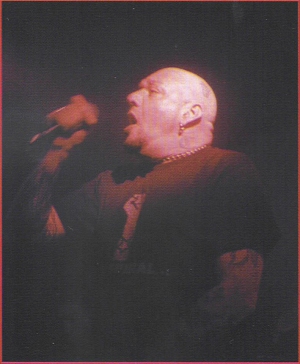 No. I think that if there'd been anything, they would have been in touch with Lea, my manager. And if it was bad, he wouldn't have said anything... In fact, I think that everyone thought that it was a good album. It sold fairly well, although I hardly get any money on it. If anyone was to make a benefit with it, that would be the Maiden lot, 'cause I sold them all my rights after I left the band. Maybe the release of such an album wasn't such a good idea, but there are some pretty good and old recordings – some of them are even about 20 years old – like this session at the L'Amours club in Brooklyn. At the time, I was working with the guitarist of Drive She Said. In any case, this a very good account of my career, some kind of official bootleg. On top of that, it allowed me to make a big tour and to meet the fans and it'll be useful next year when we release the new Killers album... [Note: At that point, Paul was suddendly slightly distracted by a gorgeous blonde passing by]. Where was I? Her arse is nicer than that of Jennifer Lopez! Oh right, we're going to start writing for the Killers album. We already have a few ideas, some of them are over a year old. By the way, one of these songs is called 'The Beast Is Back'. Musically, the album will be a cross between Murder One and Menace To Society. Cliff and Pete [Note: the guitarist and the drummer of Killers] wrote three songs together and I think that's good 'cause I can focus more other projects. Currently, I'm only working on the lyrics for Killers. On the other hand, for stuff like Nomad, I also write the music. What's a bit annoying is that I can't write for Inbredz... I always want to try out new things. With a mate, I'm trying to do something in the style of "Fado", this traditional Portuguese stuff, but with a Hip-Hop rhythm. We have a few ideas on this subject. The guitars sound rather heavy, it sounds good but I'm not sure that we'll manage a whole album like this. Moreover, I'll have to sing everything in Portuguese... I admit that it might sound a bit weird. As a musician, I have the opportunity to do all sorts of different things. Sometimes, the press or even the fans find it hard to follow, but well, that's what I am – I am a musician, I don't do anything else. 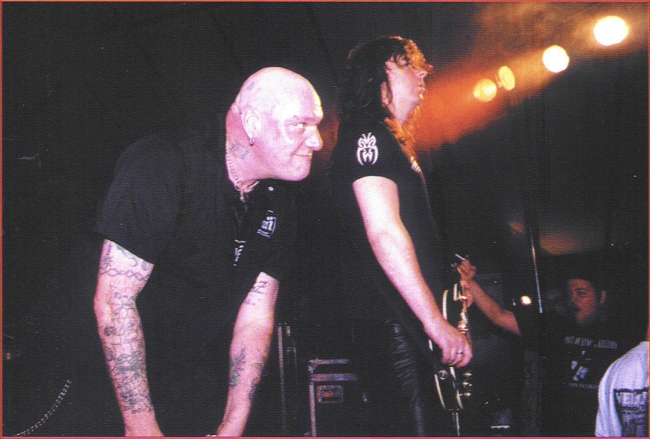 Is it true that youre going to give an acoustic showcase at the Wembley book fair?

Yes, on 30th November 2002, it's going to be a great day. All my family will be there. I'll take my children along: when I'll sign the books, I want to have my daughter on one side and my son on the other side. It's one of the biggest book fairs in Europe, and maybe in the world – you can also get records there. The organisation committee first approached me for an autograph session for my bio, then they offered that I perform an acoustic show. So we decided to play five songs in semi-acoustic, some sort of "Paul Di'Anno Unplugged" kind of thing. We're probably going to play 'Dream Keeper', I'm not quite sure yet, it's my ex-wife who suggested it. We'll see how it goes, but she's always right.

By the way, why don't you play more songs from Killers on stage? 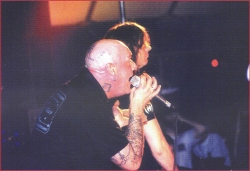 We'd like to, but we haven't really had the time to rehearse... I'm getting fed up with playing Maiden songs. We've tried 'Die By The Gun' and 'Faith Healer' in Italy but the songs were not really ready. We also wanted to play 'Impaler' but we weren't confident enough in the result... Next year, with my solo band, we'll give longer shows: we'll play only 2–3 Maiden songs – it has to be done – plus a few songs from Battlezone – (two from Welcome To The Battlezone), two or three songs such as 'Children Of Madness' and 'Feel My Pain', five songs from Nomad, five or six from the new album, one or two from Killers, and maybe also a Punk number. The show will last almost two hours and I hope we'll play larger venues.

Can we hope to see you one day playing a gig in Paris?

I don't know. It's very difficult to find a promoter. I'd love to. Last time I was over, I spent all my time at the Louvre and at the Musee Picasso. We originally came for four days, but we ended up staying for a month. We went several times to the Louvre, we visited Notre-Dame, took the bateau-mouche on the river Seine. It was excellent... 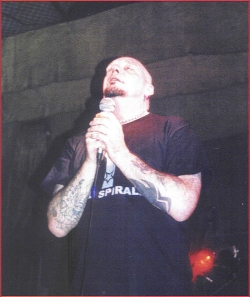 You've done many thing this year. Isn't it difficult to live like this?

There's so much pressure (you gotta go there, you gotta do that) that, at times, you think, "Shit, and how about the things I want to do?" Maybe I'd like to spend my day watching football, but I can't. My life doesn't belong to me. That said, when I have to spend some time with my kids, I always manage to free myself. It's not an easy business but that's what I chose to do... I think that I'll retire soon, or at least tour a bit less and focus on writing. The problem is that I prefer to play live. Ideally, I should be able to take my kids on tour with me. So I wouldn't have to stop, ever.

How do you manage to keep your voice?

I don't know. I don't make any special effort. I think that life is a piece of shit and that feeds my aggression. I think that everybody should have the same possibilities, may it be about money or eduction. Equal chances... But this ain't gonna happen and I'll stay motivated. I have a charity project in Argentina, in Buenos-Aires, and I'm trying to get some money for it. It's an organisation that cares for children with head traumas (it's called Los Chicos de la Esperanza /Note: The Children Of Hope). It's managed by two women who really work hard: they run the hospital, the school, and a music school for the kids. I also have another charity in Brazil. I don't know if I will help them by performing gigs or simply by talking about them wherever I go. I'll try to launch a support campaign for those charities and I hope I'll involve other musicians. I believe that I'm making myself useful, even if I don't think that my music will change their lives. I believe that, by making music, I help people to feel better.

PS: Massive thanks to the Belgian Paul Di'Anno fan-club for its welcome and for the chips!