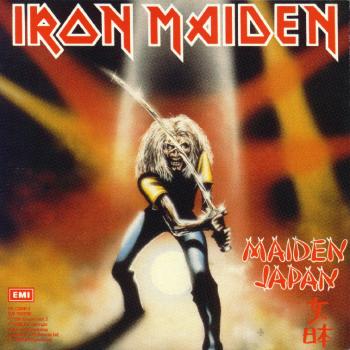 Maiden Japan was recorded on Iron Maiden's first Japanese Tour (21st24th May 1981) and was released as an EP, with the American version containing 'Wrathchild' as a bonus track. It was moderately successful, reaching 43 in the U.K. charts. Apparently there is no easy way to translate the pun "Maiden Japan" ("Made In Japan", for those who are not familiar with the English language) into Japanese, so the Japanese version of the EP was instead entitled Heavy Metal Army.
In my opinion, the Maiden Japan EP is excellent. All of the songs sound great, although there isn't as much guitar separation between the left and right channels as I'd probably prefer. Paul Di'Anno sounds good too, which is ironic since these were his last days with Maiden, during which is voice was continually giving out and causing problems. An extremely rare Venezuelan pressing of the EP actually shows a Riggs painting of Eddie holding Paul's decapitated head, confirming his departure from the band. In any case, for me the Maiden Japan EP is the highlight of the First Ten Years box set.