The Ides Of March

At only 1:44, this is Maiden's shortest track. It's way too short, because it's a brilliant instrumental, probably among their best. The ides is the 15th day of March, and might be referring to the famous warning, "Beware the ides of March" from Shakespeare's Julius Caesar. The Ides of March was actually the date when Caesar was murdered by Brutus and his accomplices, as is shown in the play. It is also historically accurate and may be the first historical reference in Maiden's career, a tradition carried on with songs like 'Invaders', 'Run To The Hills', 'Alexander The Great', and many others. Great guitar solos and a cool drum track make this an awesome opener for the album, and it combines so well with 'Wrathchild' that they could easily be one single song.

It is interesting to note that there are some striking similarities between the track 'Thunderburst' by Samson and this particular piece. Thunderstick, Samson's masked drummer, used to play in Iron Maiden before Doug Sampson and Clive Burr, and co-wrote the song with Steve Harris. The song was later recorded by Samson on their 1980 album Head On whereas Iron Maiden recorded it in 1981 on Killers. Henrik Johansson's very good but sadly now defunct Samson website featured the following analysis: 'Thunderburst' has an acoustic guitar intro which is not on 'Ides...' and the songs are in different keys. One chord in the riff pattern is altered in 'Thunderburst' and a choir-like thing is added on the end of the song. What is strange is that Steve Harris is credited for co-writing on 'Thunderburst' while Steve takes the credits himself on 'The Ides of March'.

This is THE classic track from Killers, and a concert favourite. It's catchy and accessible, and was originally recorded on the Metal For Muthas compilation, which might be why it wasn't included on the previous album. It is about an angry young man searching for his unknown father, presumably with violent intentions. Nice bass intro too.

Murders In The Rue Morgue

Very loosely influenced by Edgar Allan Poe's (18091849) short story Murders In The Rue Morgue, this song tells the story of a fugitive who is being sought for murder It is another fast-paced and relatively catchy tune, which doesn't normally take long to like. However, it should be pointed out that the song is only vaguely related to Poe's story, which is a Doyle-style murder mystery. About the only similarities between the story and the song are, with the exception of the title, the murders of two women on the Rue Morgue in Paris (this street does not actually exist though). Consequently, it is necessary to analyse the song lyrics on their own merits.

Pay special attention to the last lines of the song:

But I know that it's on my mind

That my doctor said I've done it before

This raises the interesting possibility that the individual in the song is deluded and schizophrenic. Did he actually murder the girls after all? He did have blood on his hands...

This is a strange little song about some pretty unhappy person apparently contemplating suicide. The guitar riffs are alright, but the lyrics are somewhat repetitive, as if Harris suddenly had a mental block and decided to repeat the same verse three times. Perhaps the repetition is intended to strengthen the effect of the lyrics. In any case, it's not a bad song. 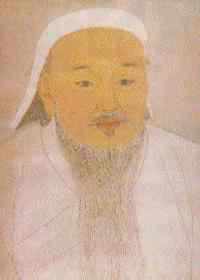 Like 'The Ides Of March', this is another brilliant instrumental track. It is longer and much more complex, with many rhythm shifts that highlight Clive Burr's great drumming skills. This might be Maiden's best instrumental song, which flawlessly sets a mood reminiscent of Genghis Khan (c.11621227), the great Mongol military genius and scourge of the Far East during the 13th century, and whose empire was the largest in History. Genghis Khan features among the worlds greatest conquerors, alongside with Julius C?sar and Alexander the Great. He was the son of a minor chief in what is nowadays Eastern Mongolia, and was originally given the name Temujin. He united the nomadic tribes of Mongolia in a disciplined military state and became known as Genghis Khan, or "Universal Ruler". In 1207, Genghis Khan led the Mongols on the first of many destructive, bloody invasions. It is not known exactly how many people were slaughtered by his destructive raids, but even the most conservative estimates suggest that several million people died. He never learned how to read, but his success as a ruler resulted from his superior military organisation, strategy and mobility.

According to Nicko, 'Genghis Khan' was written on short notice as filler for the Killers album and was at the time given the working title of 'Jenkin's Barn'. You'd never know it though, because this song really rocks!

'Innocent Exile' continues the theme begun in 'Murders In The Rue Morgue' of an unjustly accused fugitive. In fact, it could well be a direct continuation where the fugitive is expounding on the wretchedness and hopelessness of his situation. It may be a bit difficult to get into this song at first, but it can later become one of the favourites on the album. The bass intro is cool, but the guitar solos are particularly brilliant and the last half of the song is great.

A journey into the twisted mind of a deranged killer, this is undoubtedly the best song on the album. It represents the climax of the "killers" theme, describing the murder from the killer's perspective, who for the most part seems to revel in the adrenaline and power of the act. There is however another interesting detail in the lyrics:

I have no one, I'm bound to destroy all this greed

A voice inside me, compelling to satisfy me

This suggests that the killer is not only motivated by blood lust, but is also on some sort of moral crusade. And the mention of internal voices reinforces the possibility of schizophrenia that may have been implied in 'Murders In The Rue Morgue'.

This song appears on the North American versions of Killers, but was not included in the European version since it had already been released there as a single. 'Twilight Zone' was originally intended to be a B-side, but it turned out to be so good that the band released it as an A-side instead. According to Nicko, the band's producer Martin Birch was absent from this particular recording session and the band produced 'Twilight Zone' themselves. It is another great track, about a spirit in purgatory that longingly watches and yearns for his still living former lover, and even contemplates killing her so that she might join him and ease his loneliness. Like most Maiden songs, it has a fast-paced beat, but still carries a mood of sadness and loss.

There is an American TV series of the early 1960s that is also called The Twilight Zone. The story of the song could very easily constitute one of its episodes.

This is a mostly acoustic song, about a repentant man reminiscent of the prodigal son parable found in Luke 15. It is not a direct interpretation however, because in the song the man is confessing his past to a Lamia. What is a Lamia? The word is not mentioned in the Biblical parable. However, among the ancient Greeks and Romans, a lamia was supposed to be a female demon who devoured children and whose name was used to frighten them. According to the myth, she was originally a Libyan queen beloved by Jupiter (Zeus), but when robbed of her offspring by the jealous Juno (Hera), she became insane and vowed vengeance on all children, whom she decided to start enticing and devouring. In Africa, the race of lamia were said to have the head and breasts of a woman and the body of a serpent, and they enticed strangers into their embraces and devoured them. John Keats's (17951821) poem Lamia (1820) relates the story of a bride who, when recognised by Apollonius as a serpent or lamia, vanishes in an instant. The 1909 painting by John William Waterhouse (18491917) is also based on this poem.

'The Lamia' is also a song by Genesis on their 1974 album The Lamb Lies Down On Broadway. Now, Steve Harris was a great fan of this band at that time and was probably influenced by them in the writing of the lyrics of 'Prodigal Son'. The ethereal atmosphere of the song seems to reinforce the idea of a Genesis influence on Harris's writing.

'Prodigal Son' could possibly be considered a continuation of the "killers" theme, in which the former killer is now searching for some kind of help and atonement. However, this reasoning doesn't exactly fit, since the lyrics hint that the prodigal son's past was linked to "mystic things and magic", and not necessarily to violence or murder. Still, it's quite a good song with a very different sound than the rest of the album.

This song is a remake of a very early Iron Maiden song originally called 'Floating', and which they used to play in their live set during '76 and '77. It is not sure if there are any existing recordings of 'Floating' (Steve Harris may have some), but according to Nicko 'Purgatory' is a speeded up re-arrangement for the Killers album. The lyrics of this song read like a poem, and like most poetry, the meaning is not readily apparent. It might be a continuation of the theme begun in 'Twilight Zone', or it might just be some sort of a dream. It's a good song though.

With a bit of imagination, 'Drifter' can be seen as the final part of the "killers" thread, which seems to focus on the possibility of new beginnings and hope for the future. The mood of the song is much happier than the rest of the album, and for many years was played extensively in concert.

'Drifter' is one of those songs that is at its best when played live, and often features the audience-interaction part of the show with the familliar "yo yo yo" routine which is supposed to make fun of The Police's song 'Walking On The Moon' that was a very big commercial hit at that time. This is considered by many fans as one of the lesser songs on the album as it just seems mundane and drab, without Maiden's usual flair. It is still a brilliant song in my opinion, and I suppose that this is probably just a case of personal preference.