The Number Of The Beast album lyrics 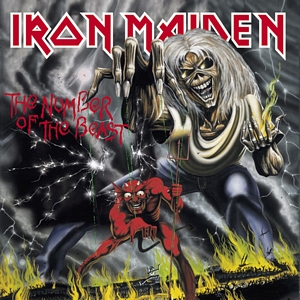 They're coming in from the sea
they've come the enemy
beneath the blazing sun
the battle has to be won
Invaders ... Pillaging
Invaders ... Looting

2. Children Of The Damned

I'm on the run, I kill to eat
I'm starving now, feeling dead on my feet
Going all the way, I'm natures beast
Do what I want and do as I please

Not a prisoner I'm a free man
And my blood is my own now
Don't care where the past was
I know where I'm going ...out!

5. The Number Of The Beast

"Woe to you, Oh Earth and Sea, for the Devil sends the
beast with wrath, because he knows the time is short...
Let him who hath understanding reckon the number of the
beast for it is a human number, its number is Six hundred and
sixty six."

This can't go on I must inform the law
Can this still be real or just some crazy dream
But I feel drawn towards the evil chanting hordes
They seem to mesmerise me ... can't avoid their eyes
666 the number of the beast
666 the one for you and me

We fought him hard we fought him well
Out on the plains we gave him hell
But many came too much for Cree
Oh will we ever be set free?

Run to the hills, run for your lives
[repeat to end]

Face at the window leers into your own
But it's only your reflection still you tremble in your bones
How long can you hide? How long 'till they come?
A rat in a trap but you've got to survive

Once you were glad to be free for a while
The air tasted good and the world was your friend
Then came the day when the hard times began
Now you're alone but alive for how long?

In Gangland you tell no tales

Cold as steel the darkness waits its hour will come.
A cry of fear from our children worshipping the sun.
Mother natures' black revenge on those who wasted her life.
War babies in the garden of Eden,
Shall turn our ashes to ice.

Around the world the people stop,
With terror stricken eyes.
A shadow cast upon them all,
To crush them like a fly.
In the icy rain and whiplashed seas,
There's nowhere left to run.
The hammer blows of winter fall like a hurricane.

Around the world the nations wait,
For some wise word from their leading light.
You know it's not only madmen who listen to fools.
Is this the end, the millions cried,
Clutching their riches as they died.
Those who survive must weather the storm.

Gone are the days when man looked down.
They've taken away his sacred crown.
To be set free, it took so long.
It's not journey's end, it's just begun.

9. Hallowed Be Thy Name

Somebody please tell me that I'm dreaming
It's not easy to stop from screaming
But words escape me when I try to speak
Tears they flow but why am I crying?
After all am I not afraid of dying?
Don't I believe that there never is an end?

As the guards march me out to the courtyard
Someone calls from a cell "God be with you"
If there's a God then why has he let me die?