Beast On The Road Tour 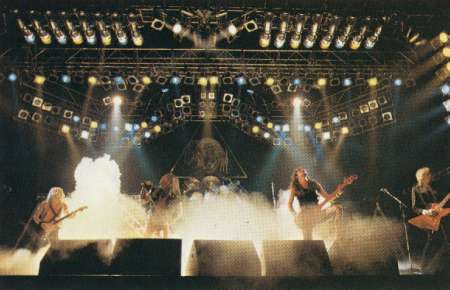 With the arrival of ex-Samson lead singer Bruce Dickinson, Iron Maiden successfully overcome the loss of Paul Di'Anno and recorded their most successful and breakthrough album to date The Number Of The Beast and even had a radio hit with the Run To The Hills single. Publicity abounded for the band as certain groups branded them as Satanists. However, the fans quickly embraced Bruce who delivered a more theatrical stage presence and live vocal gymnastics. Although Maiden was the opening act for bands like Rainbow, it was this tour when it was decided that Iron Maiden would not be an opening act again. Their first headlining show of the tour took place in New York's Palladium, which was broadcast live on U.S. radio. This show is perhaps the most "bootlegged" of all Maiden shows. This tour also marked Maiden's second appearance at the Reading Festival in London, where Blackfoot's Rick Medlocke joined them on stage during their encore to play a smoking version of ZZ Top's 'Tush'.

During the Beast On The Road tour, Iron Maiden opened for Rainbow, UFO, 38 Special, Scorpions, Foreigner, and Judas Priest. These bands opened for Maiden: The Rods, Girlschool, Blackfoot, Trust and Vandale..

Intro
Murders In The Rue Morgue
Wrathchild
Run To The Hills
Children Of The Damned
The Number Of The Beast
Another Life
Killers
22, Acacia Avenue
Total Eclipse
Drum solo
Transylvania
Guitar solo
The Prisoner
Hallowed Be Thy Name
Phantom Of The Opera
Iron Maiden
Sanctuary
Drifter
Running Free
Prowler