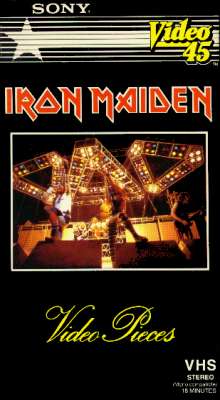 Released: September 1983
Tracklist:
1. "Run to the Hills"
2. "The Number of the Beast"
3. "Flight of Icarus"
4. "The Trooper"
Lineup
Bruce Dickinson – vocals
Dave Murray – guitar
Adrian Smith – guitar
Steve Harris – bass
Clive Burr – drums (on "The Number of the Beast" and "Run to the Hills")
Nicko McBrain – drums (on "Flight of Icarus" and "The Trooper")
Video Pieces is a short collection (about 18 minutes long) of official Iron Maiden videos for the singles from the Piece Of Mind and Number Of The Beast albums. It was then the very beginning of the music video era and these video clips have that rough and primitive feel that is common to most early music videos. These were later included in the From There To Eternity video collection that was released nearly a decade later in 1992, and again in the Visions Of The Beast compilation some 20 years later.