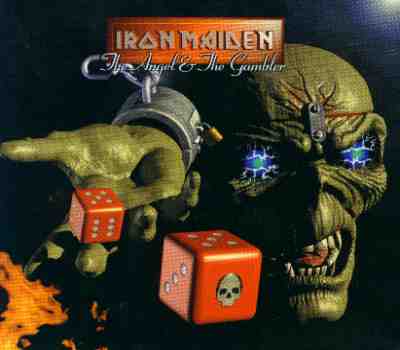 The Angel And The Gambler (Part II) 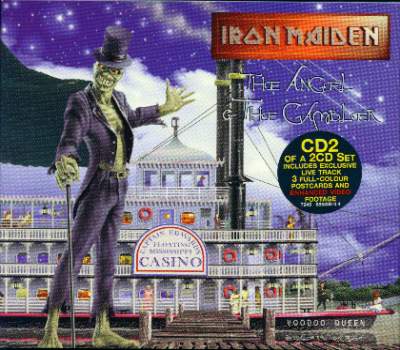 This is part II of the Angel And The Gambler single from the Virtual XI album. This single also contains three double-sided cards with the musicians posing in Maiden football gear. As already said in the Part I commentary of this single, the number 11 seems to have been regarded вЂ" by Steve Harris at least вЂ" as symbolic and as a link between Steve's main interests in life: music and football.

Like in Part I, this single contains a video instead of the usual third audio track we'd been used to so far.

The Angel And The Gambler (short Version) (Harris)
This is the shortened version of the one that appears on the Virtual XI album. This is normally quite a long song вЂ" nearly 10 minutes вЂ" but this edited version makes it a bit more palatable.

The Aftermath (live) (Harris, Bayley, Gers)
This live version of 'The Aftermath' was recorded on 1st November 1995 in Gothenburg, Sweden, during the X Factour.

Man On The Edge (video) (Bayley, Gers)
The original studio version of 'Man On The Edge' appears on the X Factor album. The video was shot in Masada, Israel, as part of a Top Of The Pops fixture в " the TOTP logo is apparent on the amplifiers.There isn't much to say about this video, except that the band is "playing" on top of one of the local houses. Nicko has an unusually small drumkit and wears an Arafat-like kind of kitchen cloth on his head. He seems to be the only one in the band not to take the whole thing seriously. Well, what do you expect from a video made for Top Of The Pops! 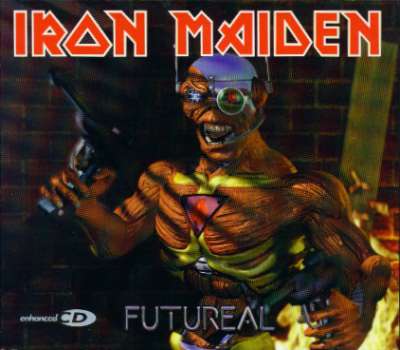 This is a very good single. It's the second single from Virtual XI, though it probably should have been the first. The B-sides are good and the enhanced multimedia video is fantastic. The only complaint that could be made would be about the cover picture вЂ" why didn't they use Derek Riggs's picture? The Ed-hunter pictures are alright, but they're nothing compared to Rigg's pictures.
This picture comes as a poster in the single. Why isn't it on the front cover? It's a MUCH better picture than the ugly Ed-Hunter cover that they used. It looks like a futuristic Powerslave picture and the planets in the background are especially nice. This picture is good enough to have been the Virtual XI album cover. BRING RIGGS BACK!!!

Futureal (Harris, Bayley)
This is the same version as the one that appears on the Virtual XI album.

The Evil That Men Do (live) (Harris, Smith, Dickinson)
This song originally appears on the Seventh Son album sung by Bruce Dickinson. This version was recorded on 1st November 1995 in Gothenburg, Sweden, during the X Factour with Blaze Bayley as the lead singer.

Listen for Blaze screwing up the lyrics here " It's pretty cool that they released this song with the screw-up intact. It apparently means that Blaze doesn't take himself too seriously.

Man On The Edge (live) (Bayley, Gers)
This live version of 'Man On The Edge' was recorded on 1st November 1995 in Gothenburg, Sweden, during the X Factour.

The Angel And The Gambler (video) (Harris)
This is an extremely cool video! It begins with "live" shots of Maiden playing on a futuristic stage, the back of which is reminiscent of Star Trek's holodeck. The stage overlooks a computer-generated area with a massive crowd and space ships swooping about. The video is a mix of these live shots and other computer-enhanced imagery including Eddie from Ed Hunter, the alien bar from the Stranger In A Strange Land single, and the band playing poker with Eddie. In the finale, the band escapes in a sort of shuttle-craft while a gargantuan Eddie stomps the stage to pieces. This might be the best Maiden video yet!