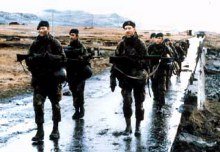 'Como Estais Amigos' is a tribute to the Argentinian people, especially the soldiers who died in the 1982 Falkland Islands War with Britain. The title translates literally to "how are you friends". The song has a sad and powerful mood, and closes the album on a reflective and emotional note.

The conflict for the Falklands stemmed from the fairly appalling political and economic situation of two countries that claimed sovereignty over the same wind-swept pieces of rock in the South Atlantic. The invasion of these islands was attempt to regain popularity by the Argentinian government, a military dictatorship at the time, and served unvoluntarily the cause of the British Tory government, which was not particularly appreciated by its people either. A surge of misplaced nationalism and extreme jingoism occurred in both countries, fuelled by their respective leaders and by the press, leading to statements like "These islands are ours" or "Our boys are fighting a rightful war" on either side. The people of Argentina and Great-Britain were blissfully forgetting their respective political woes, as well as the recession, to concentrate on what was happening on the Falkland Islands.

What everyone was also ignoring is that the soldiers they sent out there were not ready for this type of conflict. The Argentine combattants were not properly trained, and most of them were young conscripts who were not even sure of what they were fighting for (some reports state that some of them had been told that the British had invaded the main land and were not even aware of the exact location where they had been shipped to). On the other side, the British soldiers were trained professionals who were ready for a conflict in Europe, but not 8,000 miles away from home. The official final death toll of over 255 British and some 750 Argentinians does not reflect the real losses that occurred because of the war: many combattants on either side suffered subsequently of Post-Traumatic Stress Disorders, and the rate of suicides was so high that the number of casualties almost doubled in the 20 years that followed the conflict, both in Britain and Argentina. This is not such a surprise when you consider that most of the attacks degenerated into hand-to-hand combat with knives and bayonets probably the most horrifying experience for a soldier.

Shall we keep the fires burning

Shall we keep the flames alight

Should we try to remember

What is wrong and what is right

This seems to be a plea to bring the Argentinians and British together in peace and to put aside any hatred that may have been felt at the time or even now. The sacrifice of those who fought and those who fell should not be forgotten, and should serve as a lesson for peace for the generations to come. It was sad to hear about an incident at an Iron Maiden concert in Argentina, where a minority of so-called "fans" started some trouble when the Union Jack was waved during 'The Trooper'. Those people obviously still held a grudge against Britain, even over 20 years later although I suspect that most of them were not even born when the Falklands War took place and completely missed out on the real significance of this flag-waving during this particular song (Sharon Osbourne made the same mistake during a gig in the US in 2005). It's dumb people like that who support unnecessary bloody conflicts and make "the wickedness and sadness come to visit us again."

No victory and no vanquished

Only horror, only pain

This was written by Jan and Blaze, with Jan writing the music and Blaze the vocal melody lines and lyrics. It's a sad but powerful song, quite dark but dramatic, about the Falklands war. I think it makes an excellent albums closer. 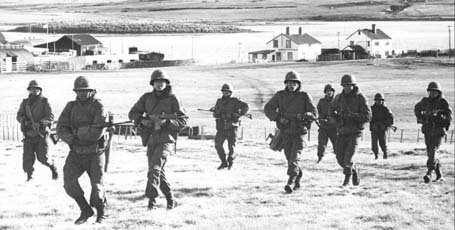