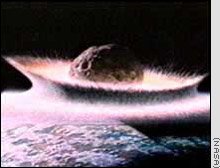 Taken at face value, this song is about the collision of worlds, such as perhaps an asteroid or comet colliding with the earth. It is a concept that has enjoyed a fair amount of publicity in the late 1990s, with the 1998 summer blockbusters Deep Impact and Armageddon drawing attention to the subject. Even though the lyrics could have been deeper, 'When Two Worlds Collide' is a good song with a good tune and some nice guitar riffs and solos.

Obviously, another interpretation comes to mind: that of the collision of two different cultural worlds. May it be the crusades, with Christian knights entering Jerusalem and meeting the world of Islam, or the first encounter of the Europeans with the North-American Indians, History is paved of such examples and the shock of these different cultures generally creates a lot of turmoil, with one civilisation trying to anihilate the other, leaving "the anger, the pain of those who remain."

This was from an idea by Dave, who worked with Blaze and then I worked with both of them, adding parts to the music, part of the chorus melody line and arranging the song. Dave wrote most of the music and Blaze wrote the lyrics.