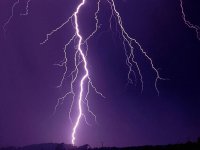 On the surface 'Lightning Strikes Twice' is about an approaching thunderstorm, and the music does justice to this concept with its slow and quiet start which soon bursts into powerful guitar chords for the verses and choruses. But the chorus "maybe lightning strikes twice" seems to hint at a deeper meaning to the song. It is said that lightning never strikes the same place twice, and to suggest that maybe it will is perhaps a statement about fate and hope. Lightning being generally used as an ominous sign, it is also likely that the narrator feels another crisis coming up in his life, one he had to face already in the past and that is about to reoccur "And as I wait and I look for an answer to all the things going round in my head I ask myself could it be a disaster and when it's maybe threatening to happen again." Like many good songs, the meaning is open to personal interpretation, and the song itself is excellent.

This started as an initial idea of Davey's and we just picked it up from there and worked it into a complete song together. I wrote the lyrics after coming up with the words for the chorus during the arranging of the music with Dave. He liked the idea of the title so I wrote the lyrics around that.