This is a fast and energetic opening track, from which the album's cover picture and futuristic theme is derived. It is about being so involved in a virtual world that the line between fantasy and reality begins to blur and dissolve. The character of the song even develops a certain paranoia "I feel them closing in" which indicates that his mind has been severely disturbed by his virtual activities and that he's really gone "in far too deep."

Whereas the actual virtual medium is undefined in the song, the lyrics describe quite accurately what can be experienced playing MUD (Multi-user Dungeon) or MMORPG (Massively Multiplayer Online Role-Playing Game) on the internet, which can completely take over your life if you're not careful. The idea for the song was probably inspired by the many stories related in the press about on-line gamers who suffered from what is called nowadays "cyber-addiction." Some took the game all too seriously and went as far as committing suicide, while others literally "played to death" and died in front of their computer of heart failure due to exhaustion. 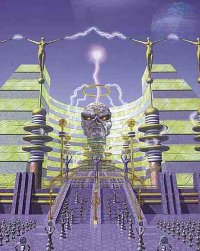 'Futureal' is quite obviously a suicide note ("when you're reading this then I will be gone") left by such an addicted player who somehow realises that the people around him are getting worried, although he strongly denies to be in the wrong "Whenever anyone seems to treat me like a freak, it makes me see I'm the only one who feels, that I know what is real." This kind of madness is sadly not uncommon among people who abusively play on-line games. Although most of the gamers are perfectly sane and treat the virtual environment for what it is entertainment some weaker minds "lose the plot" and sadly end up considering the game more real than life itself and wondering "What is real?"

It it also noteworthy to point out that Blaze somehow revisited this topic on his 2000 concept album, Silicon Messiah, mostly with the lyrics "From the first taste of this altered truth I knew I could not live the way that others do" taken from the song 'The Hunger'. Anyway, this is a great album opener with a catchy tune and some good guitar solos, and might be Maiden's shortest song with lyrics.

This song was an idea that I'd had for quite some time but hadn't worked up into a full song until the writing started for this album. I worked up all the music and vocal melody lines but I didn't have a suitable lyric, so I asked Blaze to write something for it and very fine it is too!