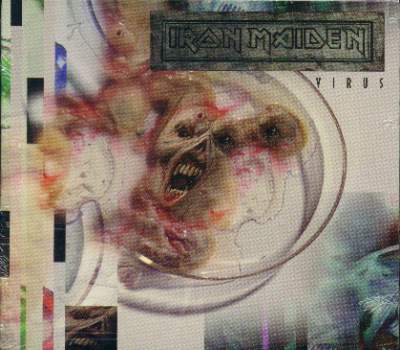 This is part II of the Virus single from the Best Of The Beast compilation, where it was the only new and previously unreleased song. It's an awesome song, but the real highlight of this single is the two B-sides, which are none other than the Metal For Muthas versions of 'Sanctuary' and 'Wrathchild'. This was the first time that these songs were officially available on CD.

Virus (Harris, Gers, Murray, Bayley)
'Virus' was written after the end of The X Factor tour in response to some of the malicious press that the band had received. The lyrics are stunningly cutting and powerful, with metaphors that add a sweeping generality that seems to include all of society.

Rape of the mind is a social disorder
The cynics, the apathy oneupmanship order

The rats in the cellar you know who you are...

Like many inspired songs, the lyrics of 'Virus' have enough ambiguity to support other interpretations. It could have well been about religion and it could just as easily be referring to politics as well.

Musically, 'Virus' is a brilliant masterpiece which begins with soft acoustics and then breaks into a fast and powerful Maiden riff and melody that will stick in your head for days after you first hear it. Despite its lack of guitar solos, this is an instant Iron Maiden classic song.

Sanctuary (Harris, Di'Anno, Murray)
This is the same version as the one that appears on the Metal For Muthas album.

This is the same version as the one that appears on the Metal For Muthas album.