Man On The Edge (part I) 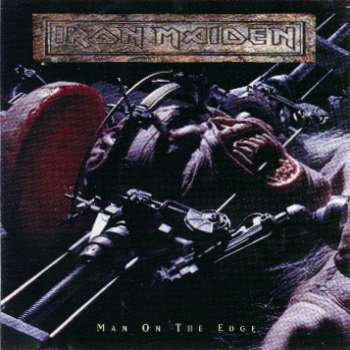 The highlight of the single is 'Judgement Day', a Bayley/Gers composition that didn't make it onto the album. The single's cover picture is a gruesome shot of Eddie's lobotomy which was also included inside the uncensored version of the album. While it is possible to understand the picture and acknowledge the way it fits into the "Eddie mythology", its extreme realism is a bit disturbing. Riggs's comic-book horror style is much better than this type of explicitness. But it is a worthwhile single nonetheless.

The Edge Of Darkness (Harris, Bayley, Gers)
This is the same version as the one that appears on the X Factor album.

Judgement Day (Bayley, Gers)
'Judgement Day' is a song that never made it onto The X Factor album, although it is definitely good enough to have been included. The main thrust of the song is that a person's appearance is no indication of their character, perhaps hinting at the evil that exists inside the hearts and minds of many "beautiful" people. Musically the song has a fairly fast riff and manages to avoid the overly upbeat mood that sometimes ruins otherwise good songs.

Blaze Bayley Interview, Part I (Wilfort, Bayley)
This is an interview with Blaze Bayley that seems to be dated relatively soon after the release of The X Factor. The topic of discussion is Blaze's auditions with Maiden and his perceptions of Maiden's songwriting and recording style. Unfortunately, this is not a complete interview вЂ“ it begins somewhere in the middle and abruptly ends several minutes later. It would have been probably better to include the whole thing, since there's certainly plenty of space for it on the disc.

This song can only be found on the picture disc of the Man On The Edge single and on the 2-CD Japanese edition of The X Factor album, which is a shame because it's a nice little rocker. The lyrics deal with the fact that we should all make the best out of our lives and they offer a message of hope for those who doubt themselves.