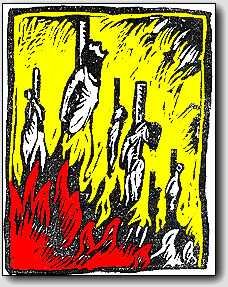 'Sign Of The Cross' is a genuine Harris epic, over 11 minutes in length. It begins with a low and ominous-sounding Gregorian chant, and slowly builds a dark and brooding mood before suddenly bursting into the fast and powerful verses and chorus. The middle of the song is dominated by a long instrumental which has a great deal in common with the early masterpiece 'Phantom Of The Opera'. The instrumental passes through the song's entire stylistic range, from the soft Gregorian chant up through an exquisitely Maiden-sounding riff melody to the climactic guitar solos. This song cannot be described as anything other than a masterpiece.

The lyrics of the Gregorian-sounding chant seem to be "?ternus halleluiah", or "Praise The Eternal", and the chant itself provides an excellent atmospheric start to this dark song. The "eleven saintly shrouded men" have also been subject to some polemic. Who are those men? Their number is also not clear. Is the "one in front with a cross held high" a twelfth man or is he part of the group of eleven? Some have claimed that those were the Apostles, whose number was twelve, minus Judas Iscariot who had killed himself, leaving therefore only eleven. Whoever they are, and what they actually represent, they make an interesting tie with some of the lyrics of an early Genesis song, 'Supper's Ready' on the Foxtrot album (1972), which has also a lot of religious imagery in the lyrics and is, like 'Sign Of The Cross', a very long song with multiple sections:

The first verse show the narrator "standing alone in the wind and rain" and in fear. It seems reasonable to assume, given the topic of the song, that he is a afraid of the Inquisition, who has "come to wash [his] sins away", and he knows that his "faith will be put to the test".

Another indication that this story may very well be that of a man facing torture at the hands of the Inquisition this abomination whose exactions and large-scale cruelty have only been matched in Western Europe by the Nazis in the 20th Century is that somebody is "asking the question time and again", and it is well-known that torture was euphemistically called "The Question". Under such torment, the narrator is wondering "why then is God still protecting [him] even when [he] do[es]n't deserve it", showing that he recognises that he has doubts concerning his own beliefs and that he is not worthy of divine protection. This statement is also one of resignation to his fate, as he is "blessed with an inner strength, some they would call it a penance". There, he seems to consider that being unable to die despite the pain he's enduring is indeed a "penance", but isn't that after all what life is about in general? Anyway, his doubts include even the certainty that "praying to God won't keep [him] alive". Indeed, prayer's never been known to do anything concrete, or the world would be a much nicer place.

"They'll be saying their prayers when the moment comes." Those "saintly shrouded men" will pray when the stake is lit, and they will pray again "when it's judgement day", as the narrator seems convinced that they are condemning him whereas he's innocent of any major crime well, certainly not that of heresy and that they are the guilty ones who will "bleed when that moment comes", whereas he will be forgiven and "God'll lay [his] soul to rest". This is most probably how many victims of the Inquisition felt when they climbed the stake to be burned for a heresy which they were convinced they hadn't committed.

The link with the excellent book and no less excellent film The Name Of The Rose resides maybe in the chorus: "The sign of the cross, the name of the rose", although this seems to be the only similarity with Umberto Eco's novel (or with Annaud's film for that matter!). The "fire in the sky" is probably also that of a burning stake whose conflagration lights the sky. In any case, if this song can spark an interest in this classic story, then it will have achieved even more than being simply a musical masterpiece!

The last lines are however quite intriguing: "Lost the love of heaven above, chose the lust of the earth below." Could this be a reference to the film/novel The Name Of The Rose where Adso, the young monk narrator of the story, has a sexual encounter with a young woman (who is tried later for sorcery and with whom he falls in love, although he has to eventually leave her but he will never forget her!), meaning that he has broken his vows of abstinence as a priest? This could confirm that the man in the 'Sign Of The Cross' story is indeed a member of a religious order, a believer who faces his doubts. We all have convictions in life and, sometimes, events happen that severely dent these convictions, even to the point of destroying them totally. All we are then left with is the fear of the uncertainty of what lies ahead.