On 9th Avril this year, thanks to Dave Lights's cooperation, Clive Burr kindly granted us an exclusive interview. This honour was all the greatest that this is the only interview that Clive has given to the press in the past ten years. The man certainly doesn't talk much, but he expresses himself so rarely that it would be a shame to miss this opportunity. Enjoy! 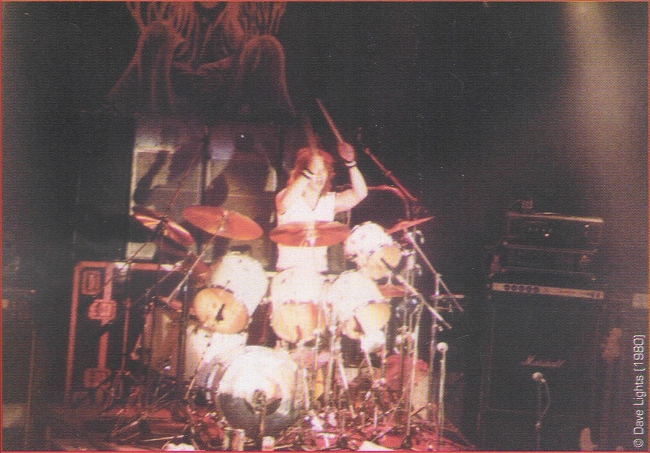 How did you start your career as a musician?

I've always wanted to play the drums. At the time, I wasn't playing in a regular band, I was playing pubs with various bands, even though I didn't have the legal age to get in. I've always been crazy about drumming, but I only could get through thanks to a succession of opportunities and meetings

Tell us about your first meeting with Steve Harris. 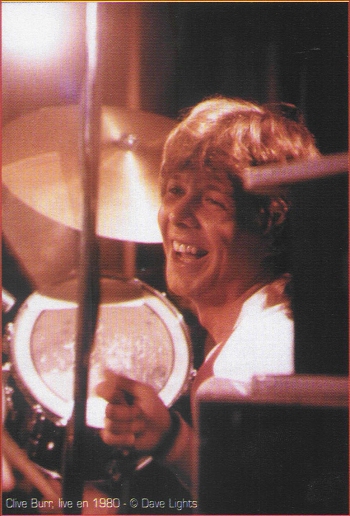 One day, I got a phone call from Dennis Stratton who told me that Maiden were looking for a new drummer. Steve Harris and Rod Smallwood then came to see me in this tiny pub where I was playing at the time. Then they wanted to meet me so they could see for themselves what my playing was like. After a few days, I got another call from them, this time to ask me to come down and rehearse with them. So I met the whole band and everything went so well that I got the job.

What part did you take in the writing of the songs for the first two Maiden albums?

I didn't write anything. I just brought in my style.

Iron Maiden and Killers are still to this day the most Punk-like albums of the band. With The Number Of The Beast, Maiden took a new direction...

No, it was just a natural progression. The band was evolving without consciously deciding to sound like this or like that.

We've heard rumours saying that Paul Di'Anno might have recorded songs for the Number Of The Beast album.

No, I don't think so. But I may be wrong, it's been many many years... Everything was new for this album. We didn't use any old idea. But, once again, my memory might fail me.

What memories do you have of the three tours you did with Maiden?

Ah... That was really great. We were driven to the gig venue, then taken back to the hotel before being driven to the next town, and so on... We didn't really have time to stop and think about what was happening. Everything was going so fast, it was a crazy schedule: hotel, gig, hotel, gig... When we arrived at a venue, everything was already set, all we had to do was get on stage...

Within three years, you've seen many musicians come and go. How did you react to these sudden line-up changes?

You know, I was in a situation where I couldn't say much. I was only a member of the band and if the band decided to hire a new singer or a new guitarist... I mean, obviously, Bruce [Dickinson] and Adrian [Smith] contributed massively to Maiden. Once again, it was a natural evolution. At least, this is how I see it today.. 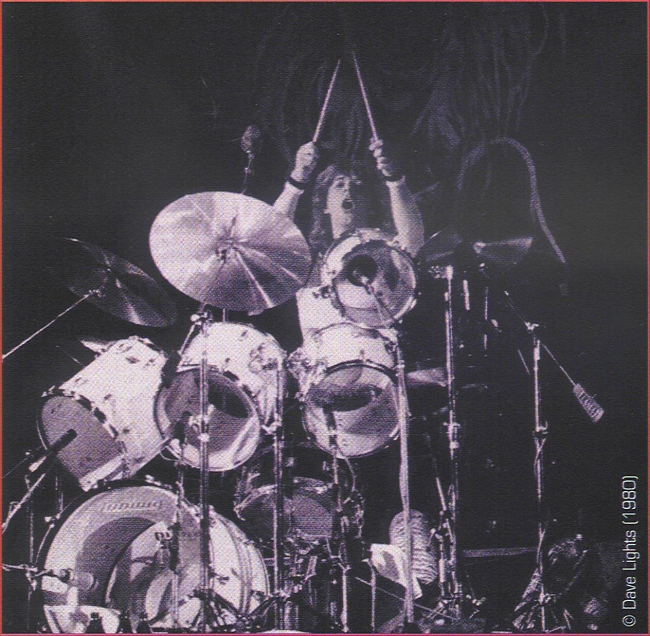 Why did you leave the band?

Dodgy question... The decision was probably made by the band, or, to be more accurate, by the man who's always headed Iron Maiden. Of course I'm talking about Steve Harris. It's always been his band right from the start and, you know, I never came over one day saying, "That's it, I've had enough, I quit." I simply accepted the decision as it was. Doris...

Have you had the time to work on a few bits of Piece Of Mind?

What did you do just after leaving Maiden? 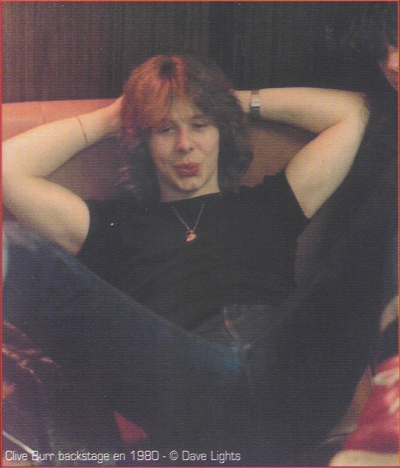 Trust contacted me. As my dad had just passed away, I went to see my mother and visit some relatives in Germany. I stayed there for some time and, I don't know how, I got a phone call from Trust asking me to come over to Paris to rehearse with them. So I took the car and I met them there. We played and they asked me to record their new album [Note: Ideal, produced by Andy Johns in 1983].

Did you play any gigs with Trust?

No, never. I only lent them a hand in the studio.

Then you joined Alcatrazz...

That's right. We played together for some time and started to do interesting things, but the band rapidly split.

Yes, for the Gogmagog project... I have to say that it was a bit like, "This is THE next band, something that'll become big, huge..." and so on... We were conditioned to reach this goal. We had just recorded our first EP, I Will Be There, but our management didn't support us tooth and claw. It was the same with the record company, they didn't put out a promotional campaign worthy of this name in any country. It's a shame, 'cause it was basically a good band.

Did you write enough material for a complete album?

None of us wrote anything except Jonathan King who wrote all the tracks. Once again, this project was his idea, it was his band. We simply were playing the songs he'd submit to us in the studio.

Then you joined Far Corporation...

That's right. Boney M's producer, Frank Farian, contacted me. I then went back to Germany, where I wasn't supposed to play, but I just mimed on a track. We only played with play-back. That was for those German TV shows. The song was called 'Sebastien' and had been previously recorded. It was fun and mostly a piece of cake as far as I was concerned.

At the beginning of the 90s, you took part in Dee Snider's project, Desperado.

There again, that was a good band. Bernie Torme was in it. But I ended up in the situation where not enough money was invested into the band. Moreover, the record company executives decided all of the sudden that they weren't going to produce albums from Rock bands anymore. So, obviously, it all went pear-shaped once again. I think that the band signed with another label, which bought the master tapes, but I think that they re-recorded the whole album from A to Z. [Note: Wrong. The album was released in its original version on a small label, Destroyer Records, in 1996.]

Since you left Maiden, you gave very few interviews. You also refused to take part in Mick Wall's project for the latest biography of the band called Run To The Hills. Why that?

Apparently, Mick Wall has tried to get in touch with me and I am supposed to have told him to sod off... Honestly, I don't remember. I don't think I reacted like that... If I did, it's not like me at all...

How about the Rock Classic project with the DVD on the "making of" The Number Of The Beast?

The company that produces these videos contacted me. I got a letter via the Musician Union, of which I am a member, 'cause nobody knows my address. The letter said, "We are currently preparing a video about the making of The Number Of The Beast, would you agree to take part in it and to give some interviews?" I agreed eagerly. 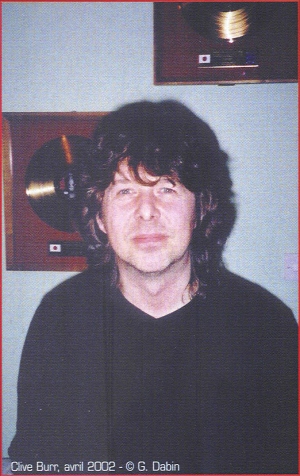 How did the current members of Maiden hear about your illness? Who made the decision to set up this charity, the MS Trust?

It was Maiden. I gave those interviews for the video and I asked the production if I could insert a little note saying, "Hello, this is Clive Burr. I am currently suffering of multiple sclerosis." I wanted to do it so the fans would know and I tried to make the message as short as possible. When the editor sent the final product to Steve Harris in order for him to validate the project, he found my note. That's how he heard about my health. Steve then called me, as well as the management of the band. They decided to do something to help me and had the idea to organise the two Brixton gigs.

To tell the truth, I was. I was both really surprised and delighted. I stopped working some 18 months ago now, and suddenly, these two gigs were organised. Then a third one, 'cause the first two sold out very quickly. All this seemed incredible to me.

What did you think of these gigs?

And all those fans?

It's one big family I thought I wasn't a part of anymore. There again, they took me in with open arms...

Why didn't you address them directly?

[Laughs] I'll tell you why... 'Cause I think that all those fans who made the trip these three nights did it for me, to help me and to support me. I didn't see myself grabbing the mic and go, [in a nasal voice] "Thanks everyone for being here tonight!" No... I preferred to get on stage and thank the fans with all my heart. Many came for Maiden, but a large number came to contribute to the MS Trust.

What are your plans?

Get over this fucking disease or at least do whatever I can to get over it in the hope that'll be able one day to grab again a pair of sticks and hammer the toms like I used to. That's my plan.

I just want to say that I am really touched by the support from the fans and that I am extremely grateful for all the messages of support that they send me. I left Maiden so many years ago, but they didn't forget me. This is simply incredible.

Thank you for welcoming us at your place to answer all these questions. 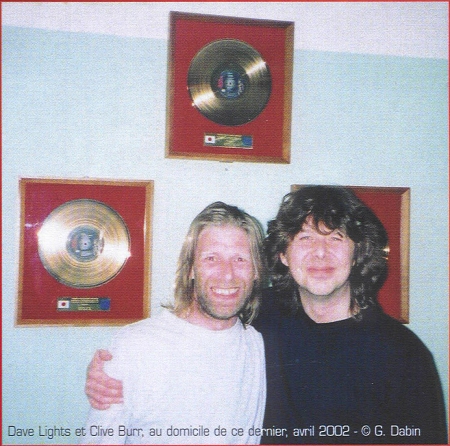